Tucson has a semi-professional soccer club, FC Tucson. Semi-professional means that they are closer to Kozły Poznań (the Poznan Goats, a semi-professional American Football team) than to Lech Poznań. They started playing just as I moved to Poland in 2011, so last night was the first time we’ve taken in a match. FC Tucson is part of the Premier Development League (PDL). FC Tucson doesn’t list a team roster on their website, so we don’t know the background of the players. I can tell you that in the PDL most of the players are amateurs, not receiving payment for playing. Some are college students, but the team can also include high school players, and former professional players who want to continue playing at a high level. In the PDL, only eight of a team’s 26 players can be over 23 years old and at least three players must be 18 or younger. 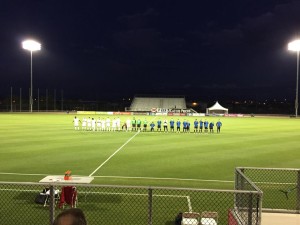 Their pitch has been converted from a Spring Training baseball field. My friend Melinda is very sad about the fact that we no longer have professional baseball in Tucson. She mentioned today soccer is being marketed as a substitute for baseball. I can see how for the die-hard fan like Melinda, it wouldn’t be a suitable replacement. For me, it’s even better! Soccer, as we’re learning to call it again, moves so much faster than baseball, more action, more athleticism.

Even for a layperson like me, the level of play last night was impressive. The play was fast with amazing footwork and most importantly, with some GOALS! The first half was very exciting, but after a 20 minute half-time, I found myself fading during the second half. It seemed like the players did too. The second half brought more passing of the ball back and forth across the field rather than moving it down the field. In this regard, they were much like Lech Poznan. The important thing is they won the first match of the season; we’re off to a good start!

Since we’ve come from the home of “the Poznan.” I would be remiss not to mention the FC Tucson version of the Ultras. They are know as the Cactus Pricks. A dedicated bunch, complete with drum, who did their best to bring the fan involvement and pageantry to our humble stands. 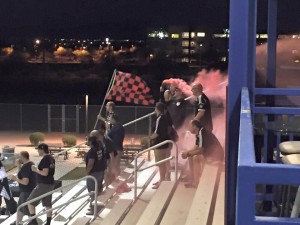 What would a football match be with a flare in the stands? 😉 Photo source: FC Tucson facebook page