We spent our last 12 days in Poland in a very nice hotel. Other than the view of the city (which could be seen from the shower thanks to the glass bathroom walls), my favorite thing about it was that we got to reconnect with a friend who works in the bar. Piotr was the bar manager at TGI Fridays at Galeria Malta until if closed a few years ago. Friday’s was our local. It’s was nice to catch up with Piotr, seeing photos of his daughter, and sampling his creative combinations. I have notes in my phone on some of the more elaborate cocktails, but this one, Hendricks gin and tonic, I was able to remember without any help. 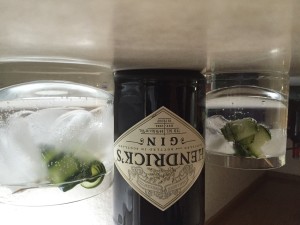 I’m usually not a gin drinker, but this is one I enjoyed emensly. Maybe it’s just a matter of having the right gin. Hendricks is made in Scotland in small batches. In addition to the usual juniper, you’ll find Hendricks infused with rose, cucumber, and elderflower and other botanicals. It teams up beautifully with tonic water. A garnish of cucumber and a dash of black pepper and you’re good to go. It’s an unusual combination that I never would have thought to pair with tonic

I had thought about baking this evening, but instead we’re in from of the telly, watching the Academy Awards with our cocktail and chips and salsa. It’s a nice way to finish the weekend. It was great to see Ida win the Oscar for best foreign film. It was the 10th Polish language film to be nominated, and it was the first to win.

I’ll wrap this up by saying this is NOT a sponsored post. I just wanted to share something I found unusual and delightful! If you’ve never enjoyed gin, it’s worth trying a Hendricks gin & tonic. I don’t think you’ll find a smoother gin.