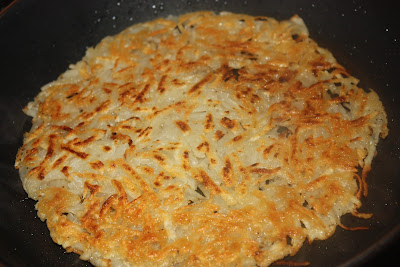 I feel like I’ve just been given the secret of the universe – how to make good hash browns at home.  Thanks to Elise for posting on Simply Recipes.  I didn’t follow her dad’s technique exactly, but it certainly put me on the right path.

I love hash browns, but seldom make them because they never seem to turn out well.  I’ve never been able to get that brown crust that you find in restaurant hash browns.

My husband and I were discussing the possibility of making hash browns on Sunday morning.  He asked if you’re supposed to soak them in water.  I’d heard of doing that with some potato dishes so I suggested we google it.

Well, the secret of the universe is that you don’t want to add water to your hash browns before cooking, you want to take it out!