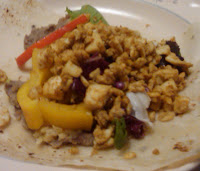 I wrote a cooking column for a weekly newspaper for awhile. I’ll never forget the time the editor called me to share feedback from one of my columns. I’d been invited behind the scenes to a charity dinner and been given a couple of recipes to share with our readers by the well known chef. That prospect was very exciting to me. The recipes were for Prosciutto wrapped halibut and a veggie dish.

The caller said, “tell that Louis (sic) that she’s crazy if she thinks people can afford halibut; that goes for $12 a pound. People can’t afford to cook that. She needs to get her head out of the clouds. We need recipes for things people can afford, like beans!” The editor was very kind, said I was doing a great job for them, and that in the newspaper game, the fact that they talked about you was more important than what they said. If I hadn’t had a 400 word limit, I might have mentioned that my supermarket didn’t even carry halibut, I made the recipe to blog about it with cod!

So after that chewing-out, I cautiously bring you another halibut recipe. When the kids brings you an ice chest full of fish, you do all kinds of things with it!

My daughter’s boyfriend was kind enough to not only bring us fish from Alaska but to cook for us too. The halibut was diced, seasoned with taco seasoning, seasoned salt and black pepper. Then sauteed in a little olive oil. The fish was served on a tortilla (flour or corn) on top of refried beans, rice, lettuce, tomatoes, onions, red & yellow bell peppers.