Life is returning to normal.  We were at the Lech Poznan match last Saturday.  We again splurged on the Silver VIP tickets and went with another couple – one of the American pilots and his girlfriend.  The one advantage of our old seats, we were closer to the pitch, you could see more of what was happening on the field.  The stuff even the officials might miss.

It was a good match, which Lech won 4-0.  Most of the goals scored by new players.  The first one by a defender!  Ed’s wondering what the coach said to the players at half-time that had them scoring goal after goal after goal in the second half.  Whatever it was, why isn’t he saying it earlier?  We were playing a club that was just this year regulated up into the ekstraklase.  They were supported by a very small group of vocal fans, who decided to go shirtless during the chilly night match.  Not to be outdone, the Kolejorz followed suit.

We were supposed to be below freezing this morning, so I brought my herb garden indoors.  As it turned out, we only got to 32 and woke up to dense fog, which is just beginning to lift. . . a bit.

When we were out with our friends Saturday, they mentioned that they were thinking of mushroom picking this weekend and invited us to come along.  Her father is the family mushroom expert.  Alas, the weather has gotten too cold for mushrooms.  Maybe next year if we’re still here.  It’s common in the fall to see cars parked along the road in the forest and families carrying baskets. I guess you could carry a picnic in and mushrooms out.  Even though mushroom picking is a common past time here, it makes me a little nervous.  My knowledge is limited to my mother saying don’t ever eat those, about the toadstools that popped up in our Phoenix yard.  That’s why you want to do this with someone who knows what they’re looking at.

Another Polish past time that I been able to enjoy is liqueur making.  I have some green walnut liqueur aging, and just bottled some plum liqueur that won’t require any aging at all.  Perfect – in less than a week. 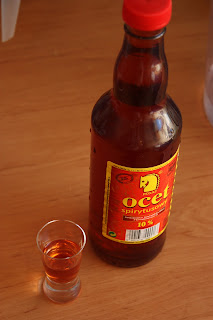 PS – the folks at Expats Blog are compiling and evaluating blogs from around the world.  They and I would appreciate your comments about my blog.  You can do so here.  Thanks!