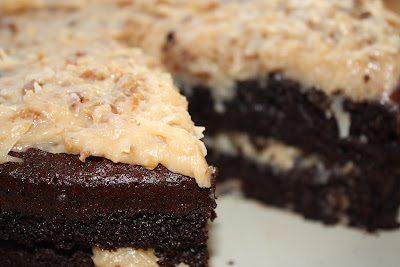 My grandmother used to make German Chocolate Cake, but this is the first time for me.  I hate to say it, but I think this one is better than Grandma’s.  The cake has a lighter texture, more chocolate flavor and the filing is thicker and  richer.  Since this is my first German Chocolate Cake, I was surprised to find the filing has to be made 3 hours in advance.  Because I hadn’t planned for it, it became a two day project.

The cake and filing were easy to prepare.  I wasn’t able to find the sweetened condensed milk for the filing, so I used evaporated milk and planned on a little Internet research to find out how to  sweeten it.  No research was necessary; Rose had anticipated my dilemma and included everything I needed to know in a note to the recipe.

As I planned to share the cake with Polish friends, I began to wonder about the name and background of the cake.  It didn’t seem German to me.  Come to find out, the cake was originally created  by a Dallas housewife in the 1950s; she used German Baking Chocolate.  The manufacturer got news of this and began distributing the recipe on its chocolate which was developed by Mr. German in the 1850s,  Back to the subject of sharing with friends.  This yummy cake was very popular.  Ela said that it was now in first place for the things she’s sampled from my kitchen – with chocolate chip cookies coming in a close second.