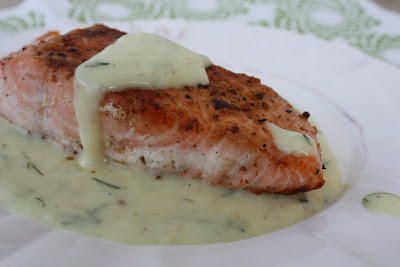 If countries had a national herb, Poland’s would be dill.  I have bought more dill for cooking in the last 5 months than in the rest of my life combined.  Before I moved to Poland, I would have associated dill only with pickles.  Now, I’m tossing it in a salad, soup, or an omelet.  This new fascination with dill is why this sauce caught my eye.  It’s quick and easy.  It comes from Nela’s Cookbook. Nela recommends it with boiled beef or chicken, but we paired it with salmon.

I modified the recipe a bit, substituting 1/2 cup of heavy cream for part of the broth.  I would have liked a little tartness with the fish, but I didn’t risk adding lemon juice for fear that the cream would curdle.  Sour cream or yogurt might have been better dairy options in this case.

P.S. — While Nela’s and I have put this over protein, it’s also common to see a sauce or gravy with dill over potatoes, mashed or boiled. It’s something we were served frequently when Ed spent a month in a Polish hospital, a time that was intense immersion into Polish life. Our Polish language skills improved and we had typical Polish food three times a day. As institutional food goes, I have to say that it was really good and tasted like home cooked.

Great over meat or fish

Yogurt or sour cream may be substituted for part of the cream. If using add at the end of the cooking time.