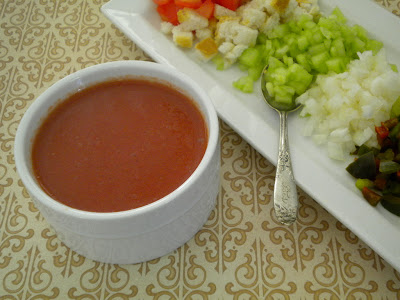 Just as I sampled Sangria all over Spain, I spent four years tasting Gazpacho across the Iberian Peninsula.  My only regret was that it was a seasonal dish on restaurant menus, served only in the Spring and Summer.  During the colder months, one had to make due with other selections.

How do I describe the sensations of Gazpacho for you?  The soup itself is cold and tart with a smooth texture, which is in stark contrast to the crisp, finely diced vegetables (and bread) served on top of the soup.  It is SO refreshing!

The recipe I’ve developed rivals the best tasted in my Don Quixote like quest for the ultimate Gazpacho.

A cool refreshing soup for summer

When the waiter would serve the toppings, I always said, “un poco de todo.”  My Spanish may not have progressed much beyond the kindergarten level, but taste buds did.