There are noticeable differences in Polish society and American society.  Ask an American how they are, and the answer will be “fine.”  We have a cultural norm of cheerfulness.  Smiles for everyone, whether you mean it or not.

Ask a Pole how they are, and they will really tell you, and it won’t be good.  I found an explanation for this on the internet recently.  Apparently, in Poland, it would be considered bragging to claim that everything in your life is fine.  It is polite to complain about a lack of sleep, poor health, or a heavy workload.

There is also the feeling that it would be dishonest to smile at someone for whom you don’t have kind feelings, including strangers.  If you’ve ever flown on Lot Polish Airlines and on Southwest Airlines in the U.S.,  the difference is well illustrated by the respective flight attendants.  The Lot flight attendants on the turboprops I take between Munich or Frankfurt and Poznan are very competent and very serious in German, Polish and English.  Southwest flight attendants, well, they’re sometimes over the top:

Now on to culinary differences.  That’s what got me started on this line of thought.  My husband and I ordered scrambled eggs at breakfast this morning.  We know that Poles like their jajecznica cooked less than most Americans like their eggs, so we got out the translator app on the phone to tell the waitress, “well done, cooked more.”  The poor guy in the kitchen just couldn’t do it.  I think the thought of serving dry eggs was just unconscionable. 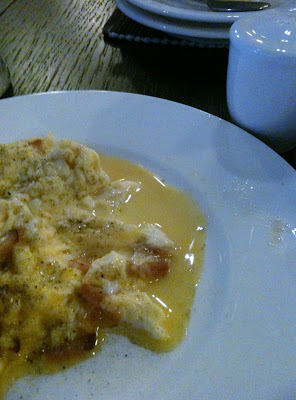