It may be Boxing Day, but it’s not too early to begin planning for New Year’s Eve. This Classic Champagne Cocktail is Great for NYE, Valentine’s Day, or Easter. I’ll bet your life has many special occasions that call for a festive beverage; you can’t go wrong with such a classic! 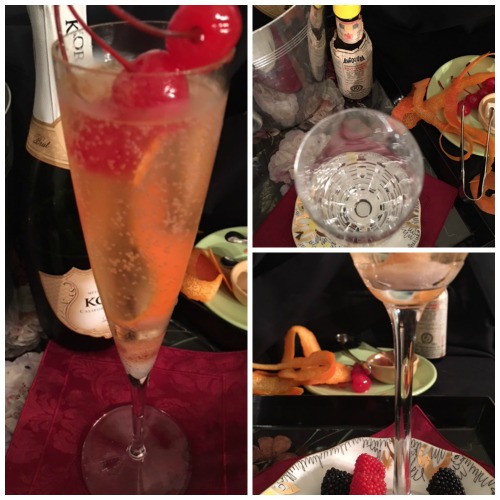 My first taste of a champagne cocktail was at Bar Eduardo near the bullring in Madrid back in the day. Ed was stationed in Spain at the time, and we thought it was kind of cute to visit a place with his name.

Once we stepped inside, we knew there was much more that was special about Eduardo’s. The bartenders were consummate professionals. This was long before the movie Cocktail or bartenders being known for flair. The staff at Eduardo’s were ahead of their time.

The classic champagne cocktail seemed to be their signature drink and they prepared it deftly. It was fascinating to watch. The cocktail was always served with a few gummy raspberries and blackberries alongside. It was our first encounter with the colorful candies, and they’ve been a favorite ever since. We had to keep that detail as we tried to recreate their process.

We must have mentioned our outings to Bar Eduardo to my parents because at one point, my mother sent us an article from the New York Times magazine. The subject had to do with the lesson American workers could take from the bartenders at Bar Eduardo near the bullring in Spain’s capital city. The author spoke of the great pride they took in their work, the dedication to getting it right, no corners were ever cut.

If our Bar Eduardo still exists near Las Ventas, they have no Internet presence. So I’ll toast their lasting memory.

Elegance in a glass