I don’t remember having caramel buns or other cinnamon rolls as we traveled around Europe. I had it in the back of my mind that this would be an American creation. My research tells me I’m wrong; apparently cinnamon rolls are popular all over Northern Europe and thought to have originated in Sweden. I guess chocolate chip cookies are our only claim to fame in the baked goods department. 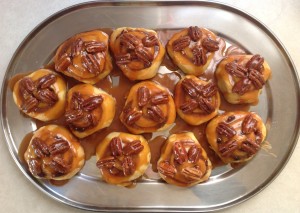 Rose’s caramel buns are extraordinary no matter where they originate. A brioche dough is spread with an egg wash (rather than butter) to act as the glue in securing the cinnamon sugar filling. Toasted pecans and boozy raisins are also added before the dough is rolled and sliced. I took liberties here and substituted dried cranberries for half of the raisins. I just love the tartness they add.

After baking the soaking liquid from the raisins is reduced and enriched with a bit of butter. This glazes the warm rolls before they’re topped with a delicious homemade caramel and pecan halves.

If you plan to make these, start early. The dough involves at least 9 hours of raising at various stages along the way. Maybe put this together the day before you plan to eat them. Because these are so time consuming, my only complaint would be that the recipe only makes a dozen. I think it’s certainly worth doubling the recipe. 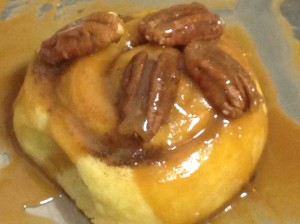 The caramel sauce is fantastic. To illustrate that point, I’ll tell you that as Ed was having the last roll on the serving platter, I grabbed a spoon and scooped up some of the caramel that had dropped onto the platter, and he was kind of territorial, reminding me that part of that caramel went with the bun he was eating.  Try making this caramel, you’ll find yourself licking the spoons too.