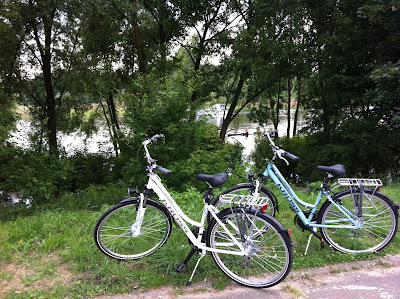 I’ve been riding a bike in Poznan for the last couple of years – ever since my friend, Elzbieta, planned an outing for us on bicycles.  Before that, my last bike had a baby seat on the back.  The baby now rides a motorcycle and is old enough to rent a car, so it’s been awhile.

I usually do a lap or two around Lake Malta.  When I’m feeling really up for a challenge, I have done as much at 30 miles at the lake; that’s a lot of laps.  Occasionally, I’ll ride to the supermarket and bring home groceries in the basket that’s designed to carry a dog.  I’ve also taken the dog to the vet’s office just a few blocks away by bike, and one time I biked to Sweet Surrender.

Recently, my husband got the clearance and encouragement to start biking as part of his physical therapy in recovering from sepsis.  No surprise here, the fighter pilot is more adventuresome than the accountant – also better with maps.  I think it’s been 3 weeks since we started riding together and I’ll bet we’ve logged 100 miles and only 1 lap around the lake. There are some really nice long bike paths in Poznan; they’re just not all connected at this point.  If one path has been too congested, Ed has been really good at finding us a better route.

We have been exploring, been to the Olympic Stadium, through the forest, found the remnants of old forts (the fortress kind not the kids playing kind), and out for pizza on our bikes.  We’ve ridden on a narrow bike path that is in the median of a highway – cars whizzing by both sides in opposite directions; that will make you dizzy.  We’ve found some beautiful paths along the river, although, this time of year, some that we’ve looked for are under water.

Mixed up in the facts ahead of yesterday’s men’s final at Wimbledon was this gem that the trophy engraver, Roman Zoltowski who’s been doing the job for 35 years, travels to the All England Club by car from his home in Poznan. The reason – the airlines won’t permit him to carry his tools on-board as they break security regulations.