On a recent trip to France, our friend, Bill, suggested dinner at a nearby Michelin 1-fork restaurant.  He’d eaten there before and knew we would love it.  We arrived at  Auberge de Port Vallieres at 8:30 PM, and the restaurant continued to fill up as we began our meal.  We had such a good time, going through two bottles of the local Chinon wine, that we were the last ones to leave.

We began our evening with a kir royale (casis and champagne) that included a cherry that had marinaded in Cointreau.  Our amuse bouche consisted of three different bites: a 3 cm pancake topped with salmon and creme fraiche, a tiny container of seemed like a salsa with fish, and a third item that we can’t remember.  The salsa/fish was served with a little plastic fork similar to a plastic gelato spoon.  Ed’s only suggestion for the evening would have been using metal flatware rather than plastic. 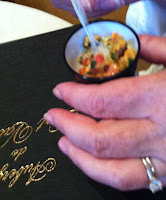 Bill made the same choices at Ed except for the starter:

Bill and Ed finished off our meal with coffee.  As Bill pointed out, you always want to have coffee because that brought us the mignardises (little sweets) that accompany it.  As part of the coffee service, a rectangle of slate was placed in the middle of the table.   On it were three small macarons, three  piece of pate de fruits (similar to aplets & cotlets), these had been cut on the diagonal and the resulting triangle stood upright.  Leaning against the triangle was a small flat round that contained finely minced figs and nuts laced in caramel with the bottom side dipped in chocolate, so the texture and color of the ingredients was visible on the top.

Everything I ate was delicious.  I must especially rave about the sauce on my fish – creamy with a taste of sherry, rich and complex.  It was so good that I used bread to mop up every little bit. I left with ideas for new recipes and inspiration on new ways to present my old favorites.

The service was perfect, attentive without being intrusive.  The staff spoke English, but Bill, who speaks French, did most of the talking for us.  During the two days we spent with him, I never heard him speak English to anyone but us.  As someone who lives there part of the year, he’s very conscientious about using and improving his French.

All this, including our many drinks, was about 200 euro for the three of us.  As as accountant, I was immediately drawn to a price comparison.  Calculated as a price per person, we paid only slightly less than this for two personal size pizzas and two glasses of wine in Paris last year.  If we find ourselves back in France, I think we’ll spend our time in the countryside.