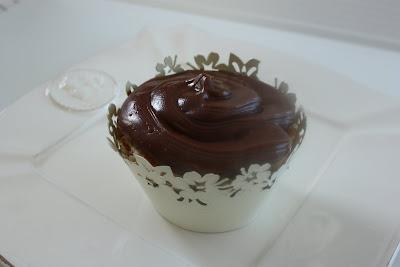 My “to do” list is long, so I intentionally compared the list of cakes Marie has already baked to the quick and easy list and came up with Yellow Butter Cupcakes for this week’s submission.  I had planned to top them with Dreamy Creamy White Chocolate Frosting, but didn’t have enough white chocolate, so it became Dreamy Creamy Chocolate Frosting.  Rose describes this frosting as reminiscent of cheesecake, so I’ll say this version is like a chocolate cheesecake.

The recipe really is quick and easy.  I whisked the eggs with a little sour cream and the vanilla.  Then the dry ingredients were combined before adding the rest of the sour cream and butter.  As a last step the egg mixture is added.

It made 16 cupcakes.  The cake is tender and buttery with a crisp crust – and did I say quick and easy? 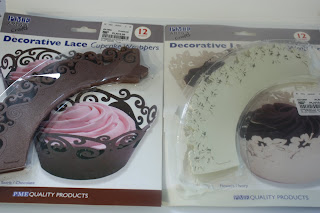 The photographed cupcake was placed in a decorative lace cupcake wrapper from PME Arts and Crafts.  I found a couple of packages at TK Maxx (not a typo) in Poland.  To get the look they have on the package, you’d have to trim the top off of your cupcake; it would have to be no more than an inch high.