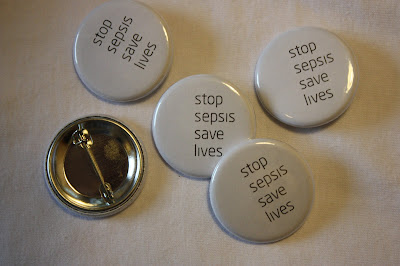 Ed and I are off to Berlin today for a World Sepsis Day event. I’m venturing away from my usual expat topics a bit because I want to make you aware of sepsis – something I’d never heard of until it almost killed my husband, as it does one person every four seconds.

“Sepsis is a potentially fatal whole-body inflammation caused by severe infection.” That’s what I found on google after my husband had been hospitalized for a few days and a visiting doctor slipped and used the term with us, something doctors on staff had carefully avoided. Sepsis is the body over-responding to infection and damaging itself in the process. Ed’s infection was bacterial, as most are, but sepsis can also occur in response to a virus or fungus.

In our case, it seemed like Ed was coming down with the flu. The symptoms hit him hard and came on suddenly – chills, fever of over 104 (40 C), extreme aches and pain in his legs. We used a lot of ibuprofen that day trying to keep the fever down.  The next morning, he woke up with bruises on his arms and legs, and we worried that the ibuprofen might have been the reason.

It took another 24 hours and two house calls (doctors still do that in Poland) before we arrived at a hospital, by this point his joints were so swollen that he couldn’t move and the pain was excruciating. I will be eternally grateful to the doctor who admitted him. He did exactly what needed to be done. He ordered blood work, pain meds, and as soon as the lab results were back, he told us there appeared to a a severe bacterial infection, possibly infection in his blood. (Sepsis is sometimes referred to as blood poisoning.)  We had to wait a bit for a bed to be ready, but the doctor told us he would start antibiotics as soon as Ed was moved to the ward.

He remained there for the next 30 days receiving antibiotics and other fluids almost continuously. Sepsis usually involves a dramatic decrease in blood pressure that damages organs, hence, the need for IV fluids to keep the pressure up. Six months later, recovery is still a work in progress, and I suspect he’s doing better than most. What we’ve come to realize is that modern medicine has made great strides in recognizing and treating sepsis, but if you survive, you’re on your own. There isn’t a prescribed course of treatment to help you get back to normal like there is with a knee replacement. Many of the specialists Ed saw or treatments he received are because he initiated it – almost arguing with his doctors that it was necessary. Their focus was looking for improvements in  blood chemistry (and the patient not dying) rather than mobility, healing (with necrosis in this case), and return to a normal active life. 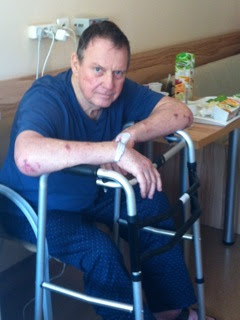 Since this diagnosis, we’ve read so many accounts where sepsis was fatal because the patients ignored their symptoms too long or doctors didn’t recognize the symptoms and failed to start treatment in time.  The thing I want you to take from this, is the encouragement. . . let me rephrase that. . . I’m charging you, to always to always seek medical attention and to insist on getting it when someone seems sicker than you would expect in a situation.  During the first day, Ed said, “I’ve never felt this bad before” – don’t ignore that. I shouldn’t have waited 48 hours to get him to a hospital, but to be perfectly honest, rightly or not, most Americans are terrified at the thought of being admitted to a Polish hospital and won’t go unless it seems to be the only option. I’m thankful we got there in time.

PS – they were never able to get a culture of the bacteria or to positively identify the source.  Doctors suspect it was a staph infection, and the most likely source was a neti pot.