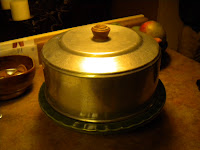 I love this cake dome; it was my grandmother’s.

I’m writing this at 11 PM on Thursday night, a work night.  I need this cake, that’s still in the oven, for my dad’s birthday dinner tomorrow night.  Oh, and I just realized that the half bag of dark chocolate chips in the pantry has mysteriously become less than the necessary 4 oz.

My baking tonight has been a comedy of errors, (the only thing missing is the dog pulling the cake off of the counter) so I’m not going to detail the prescribed process.  I’ve been so far from it, and you can read all about it on the other HCB blogs.  I’ll just mention of few of the things that weren’t ideal, and we’ll wait to see how it turns out in the end.

I wasn’t able to find Seville oranges.  I mentioned to a friend today that my search had been unsuccessful.  He offered to bring me some.  He’s a landscape designer that works for a large nursery.  Apparently, they have several of the trees, and the fruit is just falling off.  Too late for this cake, but next year, I’ll know where to go.

Just as I finished beating the egg mixture for 5 minutes.  The phone rang; it was an important call.  My eggs sat for probably 20 minutes.  They seemed a little flatter and runnier than when I turned the mixer off.  So, I turned the mixer back on for a few minutes, but it probably wasn’t long enough.  I noticed that when I poured the batter into the pan, that I didn’t have to use an offset spatula to smooth the top.  It seemed to be self-leveling.

I mentioned in an earlier post that I’m baking with a new oven.  One of the things I love about it is the digital timer.  It’s so nice to use the timer and not end up changing the time on the clock.  Apparently, I don’t have all of the buttons mastered yet.  It seems that when I meant to turn the timer off, possibly after the 5 minutes with the mixer, I turned the oven off.  At the end of 25 minutes,  my cake didn’t seem to have risen or formed a top crust.  I discovered my error and turned the oven back on. . . the cake has just come out of the oven.  I suspect that it should be higher. 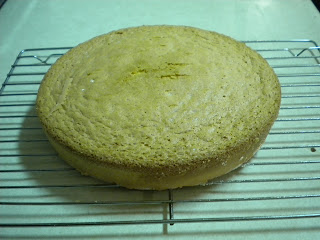 It has crossed my mind that I could start over on the cake.  I know that many of my HCB buddies would, but I decided against it.  It’s just a cake, and saltines layered with the orange curd, orange syrup and chocolate ganache would taste fantastic!  (Not the right attitude, I know.)   Instead, I’m running to the store in search of more dark chocolate.  Hopefully, something is open at this hour. . . made it just in time.  They locked up as I was leaving. 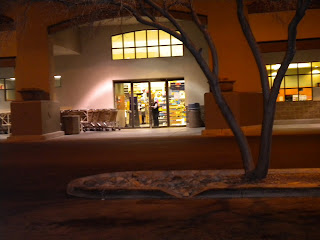 I suspect that if all had gone according to plan, the cake would have been lighter and more tender, but we enjoyed it nevertheless. 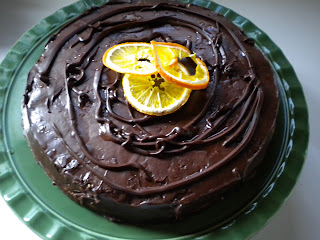 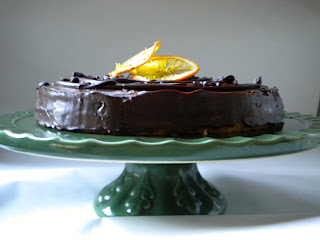 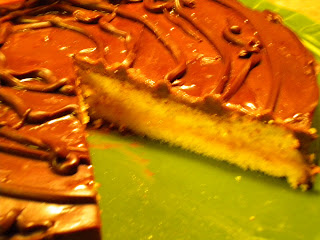 My sister, Laura, described it as “pretty darn yummy!”

Unlike my other blog posts, as part of the Heavenly Cake Bakers, I don’t post recipes from this book on the internet.  One of the reasons for this baking group is to encourage readers to purchase the cookbook.  That strategy worked on me!  After follow the group’s baking adventures for a couple of months, I ordered a copy from Amazon.  You can too.