I’m cooking my way through a Polish cookbook, and I ran into a stumbling block; several of the recipes I’m considering call for juniper berries. Where do you find juniper berries? Do you buy them fresh or dried? Maybe frozen? Are you expected to have a juniper tree in your garden? I thought they were only used in making gin!
I googled images for juniper berries to make sure I’d recognize them, and up pops a familiar Spice Island jar. Did my supermarket at home carry them and I just never noticed, or are they just found in areas with more central European immigrants? 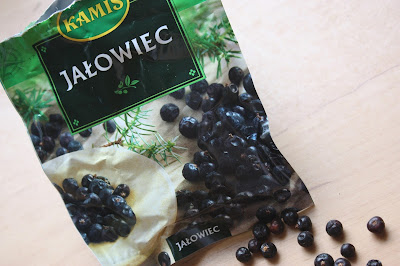 Knowing that they’re considered a spice, I put juniper berries into the translator app on my phone – jagody jałowca. I came up empty handed at Piotr i Pawel, so I tried the Alma at Stary Browar and found a packet of jałowiec, which translates to juniper. There are so many suffixes for Polish words, that usually if the first three or four letters are the same, I consider it a match, but many of you know that I’ve had a few mix-ups in my market purchases.
I may have mentioned this before, but almost all spices come in little packets like this; so does baking powder. Buying such a small amount keeps your supple fresh, but it does lead to storage/inventory issues. It has also surprised me to watch Polish restaurant shows on television and to see the chefs opening several packets of paprika to toss in a large pot of goulash. I keep thinking there should be a Costco sized spice container in a commercial kitchen, but they don’t seem to exist.
One of the recipes I’m making this week from the Polish cookbook is homemade sour pickles. This will be my first time, but I know making pickles or more accurately preserving cucumbers is a very popular pastime. We’ve been given jars made by mothers of two different friends . The recipe calls for the flower of a dill plant if you can find it. I know from past years that every super market will be selling dill flowers, as well as little pickling cucumbers, and canning jars this time of year. 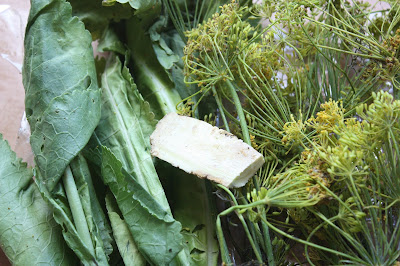 I bought the dill flower and some little cukes last night. I thought I would need to run to the little shop nearby for a piece of horseradish today. I shouldn’t have been surprised, but when I opened the package of dill, I saw that it also contained a piece of horseradish and some leaves – a pickle making kit, similar to the packages of soup veggies in every produce section.
I’m not sure what kind of leaves I have, but they went into the pickle jar even though the recipe didn’t call for it. I’m not one to argue with Polish tradition, and I know that Elzbieta’s mom put a leaf from a cherry tree in her cucumber preserves. This leaf doesn’t look like it’s from a cherry tree, but maybe a more authentic Polish housewife will recognize it and let me know. 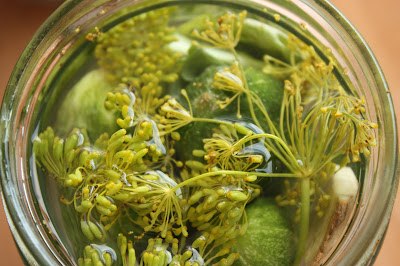