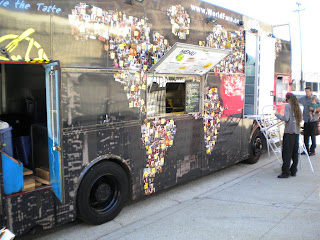 The room was buzzing as the food blogger seminar broke up last weekend in Los Angeles – the World Fare Bus was going to be outside!  Apparently, gourmet food trucks are all the rage in LA, a trend that hasn’t made it to Arizona yet.  Well known chefs are sending their offerings out to the city in the the sort of chow wagon normally found on outside factories or at construction  sites.

The folks at World Fare decided to kick it up a notch by adding a mobile dining room.  They have reconditioned an open-air, double decker bus; it has a kitchen down stairs and a patio umbrella covered dining room upstairs.  I did chat with them as they were setting up, but I was on my way to the airport, so I didn’t hang around to sample the food.  The menu was reminiscent of an upscale, Scottsdale bistro – fancy little sandwiches, mac and cheese with truffle oil, etc.

If you’re picturing yourself touring the city while noshing on fine food, I’ll have to disappoint you.  They only have customers on board while they’re parked, and the only way to know where to find them is to subscribe to their Twitter feed.  It’s a creative idea; I wish them much success.