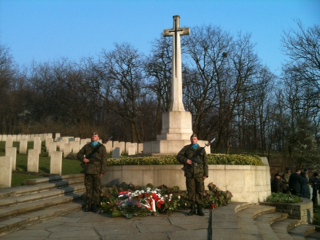 Until recently, everything I knew about The Great Escape came from the film with Steve McQueen and James Garner playing American POWs; I saw it when I was a kid. Hollywood tells a heck of a story.

It happened in Poland and this is the real story. The Nazis built an “escape-proof” POW camp at what is now Zagan, Poland and put their problem prisoners there – the ones who were repeat offenders in attempted escapes. What they really did was put the best and brightest together in one place.

The Allied prisoners planned to escape and worked on three different tunnels with that goal in mind. On March 24, 1944 (a little more than a year before the war ended in Europe), 76 men successfully escaped. The 77th man exiting the tunnel was spotted.

Only three of the 76 avoided capture and made it to safety. In retaliation for the escape, 50 of the recaptured prisoners were murdered,  and 48 of the 50 were buried in the British Cemetery in Poznan’s Cytadela (Citadel), including the group’s leader, Squadron Leader Roger Bushell.

Most, but not all, of the escapees were members of the Royal Air Force. There were Americans at the camp and they helped with the tunneling efforts, but the Yanks were moved to another camp before the escape.

Steve McQueen’s character and the motorcycle jump only happened in the movie. They did find one of the Americans from the camp and he returned to Poland for the anniversary.

He had been a “penguin,” someone with the job of smuggling out sand from the tunnel to the yard in their trousers. They would shake their foot in dispersing the sand, mimicking a penguin’s walk. The sand was a different color than the surface soil, so they had to be very careful about disposal. This account from an RAF Wing Commander, explains the penguin’s work and many other details of life in the camp.

On the 70th Anniversary of the escape, a large, multi-national ceremony in Zagan commemorated what happened there, and the next day, 50 members of the RAF set off on a 200 km (about 120 miles) march from Zagan to Poznan in memory of the 50.

They arrived at the British Cemetery in Poznan’s Citadel, limping, on Friday afternoon – many had changed from military boots to civilian sport shoes with their uniform. The brightest shoes being worn by a woman; whom we later learned was an RAF Chaplain.

Each carried a photo and short bio of one of the murdered prisoners. They filed in to stand in front of that prisoner’s grave during a brief ceremony, placing the photos in front of the headstones in unison.

Our friend, Rev. Robert Gamble offered a prayer, the chaplain read scripture, we observed a moment of silence, and it was over – a moving tribute to their bravery and a symbol of the enormous loss.

One of the 50 was a Polish POW. We overheard the organizer tell the young man marching in his memory that his family was in attendance that day and they he would introduce them after the ceremony. How nice that they got to meet the young man representing  their loved one, and it made those touched by this tragedy all the  more real. 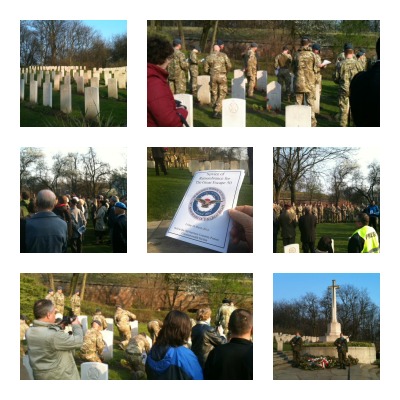 We chatted with two of the marchers after the ceremony. They were both enlisted men, munitions troops, from a base near Brighton. They were exhausted, said their feet had gone numb on the first day, and they expected them to be very painful when feeling returned.

The men were very surprised and touched by the enormous turnout in Zagan. They hadn’t heard much news on their four day march, so Ed caught them up on the important outcomes in Premier League that they’d missed.

One of their highlights along the way had been a pick-up football match with local youth. We asked about their plans for that night, recommending a visit to the Stary Rynek. They only knew that they were attending a dinner that evening and just hoping to stay awake until it was over. After averaging 30 miles (50 km) a day on foot, for four days, it’s understandable that they were absolutely exhausted.

They both indicated that they were among many who had volunteered for the project, and they felt honored to have been chosen. We noticed a headstone in the British Cemetery with our surname (not part of the Great Escape), he was a Bomb Aimer. I left the Cytadela a little misty eyed and with a growing understanding of the local history.