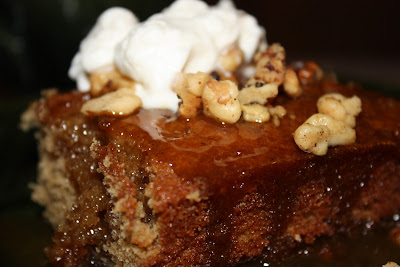 How can it be that I lived in England for 18 months and had never even heard of sticky toffee pudding?  I discovered it on a trip to the UK a few years ago, and it was one of the highlights of the trip – right up there with the Palace of Holyroodhouse.   The dessert is so enchanting that I’m cooking it while on the road.  We just arrived in Boca for my daughter’s senior recital.  After dinner, I drug everyone to the closest Publix to get the necessary ingredients.

From the expression on the cashier’s face when she scanned the spice jar with my single vanilla bean and $7.99 popped up on the screen, I don’t think they’re selling a lot of vanilla beans in Boca.  I wasn’t able to findcrème fraîche and substituted whipped cream, which I whipped by hand.  I want to say it was the first time I’ve done that, but it’s probably more accurate to say it’s the first time I remember whipping cream without a mixer.

It was fun cooking in Rachel’s little apartment kitchen; it’s better equipped that most college students could offer a visiting baker, but there was still that feel of making due.  Now for the actual process: 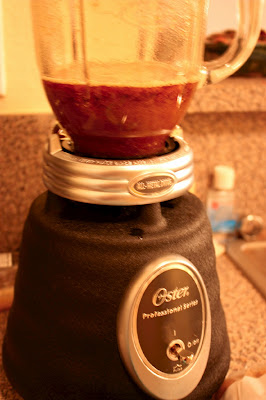 The requisite dates are steeped in boiling stout mixed with baking soda and then blended.  After these unusual ingredients, it’s pretty much your average cake.  Butter is mixed with sugar, vanilla, and eggs.  The dry ingredients are alternated with the stout date mixture until everything is combined. 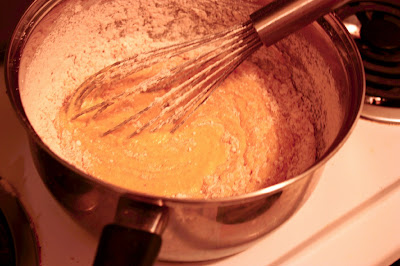 While the cake was baking, I mixed up a simple toffee sauce using dark brown sugar, that pricey vanilla bean, butter and cream.  Three tablespoons of this silky, smooth sauce topped the warm date cake.  We added toasted walnuts and the whipped cream, and soon had three very clean “dirty plates” in the sink.  It was divine.