During our time in Poland, we’d heard dire warnings about Śmigus-dyngus (the day after Easter). Friends talked of teenage boys dousing tram passengers by tossing buckets of water on them as the doors opened at a tram stop or water balloons being dropped on passers-by from apartment buildings.

I heard that these pranks had become so extreme that there was talk of the police becoming involved. Easter Monday called for a good deal of caution. 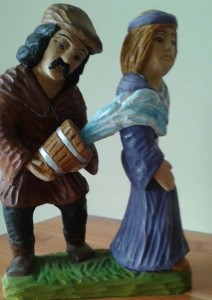 Photo credit: Lorene W. This sculpture belongs to my friend and fellow blogger, creator of adventureshereandthere.blogspot.com

Maybe we weren’t out much on Śmigus-dyngus, but we’d never seen evidence of the asperges gone awry. Asperges in its proper form consists of a priest sprinkling the congregation with holy water.

When the rector was retiring at the Episcopal church where I work, he dipped a sprig of rosemary in holy water and asperged parishioners in a special blessing on his last Sunday with them. (I mention this definition and example because it’s something I’d never come across in my mainstream Protestant experience.)

On our last Easter in Poland, we were out for a bike ride, waiting for a light at Rondo Śródka, at the tram stop in the middle of the road.

This website participates in the Amazon Associates program and earns a commission on purchases via the Amazon links below.

She was holding her grandmother’s hand and looking shyly mischievous. We both played along, feigning shock and surprise, in English of course, which seemed to give her great satisfaction.  Her grandmother gave us a smile, glad that the foreigners understood.

I was glad that we got to experience śmignus-dyngus while we were in Poland. It was like being in the know on an inside joke. We were just lucky that it was such a tame experience.