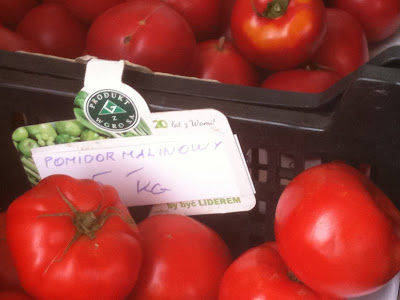 There’s a little fruit and vegetable shop on my way to the lake.  They usually have two kinds of tomatoes – one that’s big and bright red, the other is almost a grayish shade of red and smaller.  The former looked more appealing, but on my first visit, I decided I would try both.  I’m really glad that I did.

Since that time, I’ve got back specifically for the smaller tomato, which I now know is called pomidor malinowy or raspberry tomato.  I’ve never heard of that name in English, and my google research brought me to a tomato forum, where I learned that there are two varieties of Polish tomatoes called malinowy.

I like these tomatoes because they have a great flavor and unlike many tomatoes there isn’t a huge, hard core running through the center.  They slice very nicely.  I’ve saved the seeds from five or six of these tomatoes. Now that I know the name, I guess I can also check for a packet of seeds at the plant nursery.

Here’s the process for saving seeds if you want to try it: