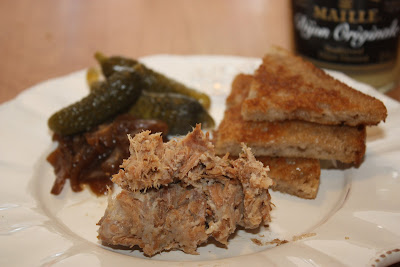 We spent a few days last summer with an old friend who is restoring a limestone home in the Loire Valley.  Among other things, he introduced us to rillettes, which at first glance seems like a meatier version of Polish smalec.  It’s shredded meat in lard.  Believe me, it’s tastes way better than it sounds.  It’s served at room temperature or slightly chilled and spread on bread or crackers and becomes creamy – sort of a textured pate.  We had this multiple times while we were in France; it’s so full of flavor. Tonight, we had our rillettes spread on toast with Dijon mustard, onion jam, and little cornichon pickles.

We were served rillettes in Poznan a week ago at a Restaurant Day pop-up.  Our restauranteur spread a steamed bun with mustard, topped it with warm rillettes (so the lard melted away and we were left with lots of moist, shredded meat.  On top of this went caramelized onions and a dab of chutney.  It was fantastic and such at deal at 10 zl or about $3.

Being reminded of how good rillettes taste, we had to try it at home.  So we picked up a pork roast at the supermarket.  I couldn’t tell you what cut because they butcher things differently here, and it’s all in Polish.  Our roast was 1.2 kg or a little over 2.5 pounds.  After I trimmed the meat and diced it into cubes (no bigger than 1.5 inches), we were left with probably 1.5 pounds of pork cubes.  I used 400g of lard, just under one pound.  The measurements need not be exact, so you can follow the process with any amount of pork you might have.