As I’ve said many times, soup is the most popular first course or light meal in Poland. year-round.  So I have another soup recipe to add to your collection. Polish Split Pea Soup or grochówka is often associated with military food. 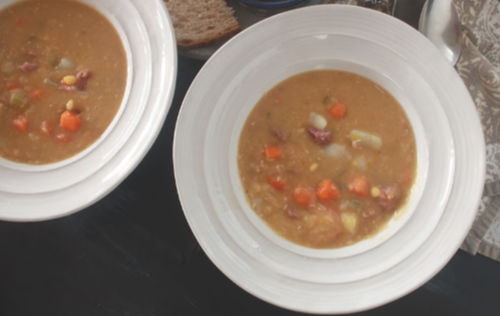 It’s something that can be made easily and cheaply in massive quantities. It can be prepared and served in the mess or a field kitchen. It’s hearty and can fuel the body for hours.

When Ed worked at Krzesiny, the Polish F-16 base just outside of Poznan, there were two places to eat on base, a chow hall and a small diner located on the ground floor of the air traffic control tower. Higher floors of the tower also included a couple of beds for transient pilots who might wind up staying overnight.

This was the only “housing” on the base, very different than the military bases we’ve known in the US and overseas, where the base is a small village or town with shops, entertainment, housing, a chapel, and schools.

The tower cafe, I’ll call it, served those working on base meals during their scheduled working hours, which were day shift only unless they happened to be night flying. There were set times for meals that were rigidly observed. When the American instructors first arrived, they set academic hours as they would have on an American base.

That created a problem because classes often conflicted with meal times. A clash of cultures! An American mindset was that work/training comes first and that students would take care of their meals before or after, on their own dime if need be. Eat at home before you leave, bring a sandwich, it didn’t matter, but be ready for class on time, and don’t inconvenience anyone else because of your mealtimes.

My impression is that these free meals during the workday were an expected benefit and that giving them up was a very troubling idea, enough so that the Polish officer in charge raised concerns.

At one point, the accountant in me said, “well, you know, it is part of their compensation.” In the end, they worked it out. As unusual as it was to us, it never would have occurred to the Polish leadership to have said as the training program began, “be sure you work around mealtimes, so the students can get to the tower cafe and back before class. I think if you’d spent your career in the Polish military that would have been a given, there would have been no need to bring it up because it would have been understood.

Ed’s favorite meal at the cafe was jajecznicza z kiełbasa (scrambled eggs with sausage), something he learned to order with confidence, but I suspect they also had grochówka and bean soups on the menu later in the day.

Use something else. Perhaps you can pick up a ham hock, or a couple of turkey wings. To me, it’s the addition of marjoram that makes this soup uniquely Polish. It’s an herb that comes with every pre-stock spice cabinet, but something I’ve only used in Polish cooking. It’s always in soups and stews. 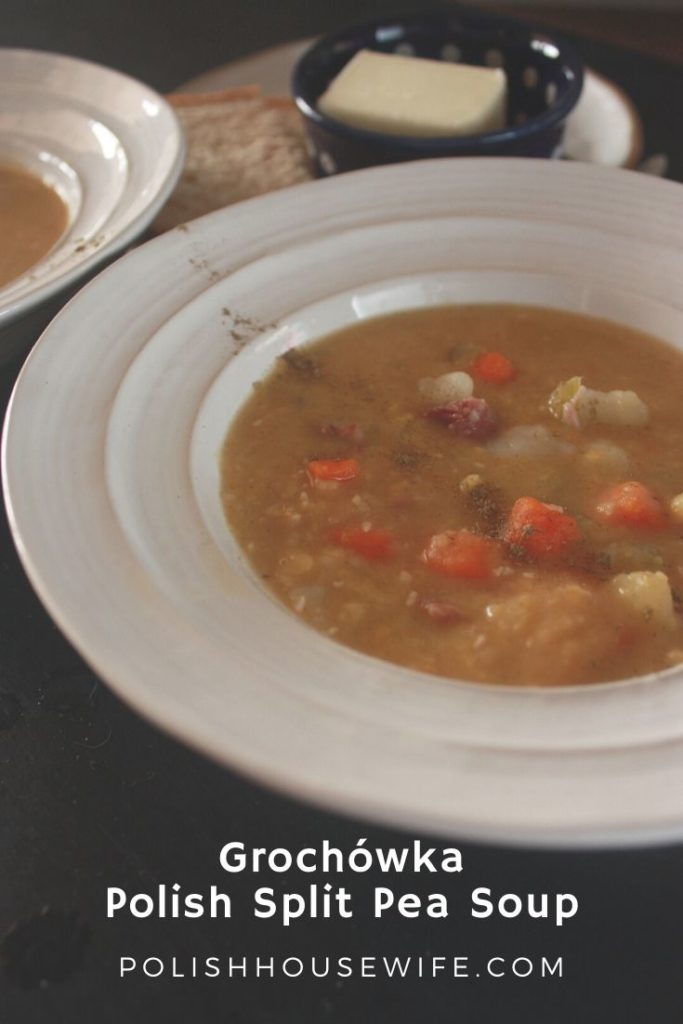 My parents taught me to always sort dried beans or peas before cooking. I still do it to this day. I dump the contents out on the countertop or table and section off small quantities that I can really look at before I scoop them into my cooking pot.

The idea is that if there is a small pea-sized rock in the mix, I’ll be able to see it and remove it. During my lifetime, the equipment used to package dried beans and peas must have improved because I used to find 2 or 3 rocks in a bag, now I never do.

Amazon associate links below – purchases generate a commission at no cost to you.

Except when I lived in Poland. It was not uncommon to find a small rock in a package of dried beans. It was even more common to find hard bits of shell in a bag of chopped nuts. Why so different? The explanation I told myself is that Poland is not the litigious society that we have become in the United States, so there was not the same financial motivation for manufacturers to make these improvements.

I hope you enjoy your Polish Split Pea Soup.

I’m a big fan of the Polish tradition of cooking potatoes with the skins on to add flavor to the potato and the broth. If you decide to skip this step and peel and dice the potatoes before cooking, you’ll still have a delicious soup.

If the soup becomes too thick, add water to get your desired texture.