If you recognize the remnants of a recent trip to Jana’s Bakery in Phoenix, you’ll know what this recipe is about. Krówki – Polish cream fudge made with milk or cream, sugar, and butter. It’s so simple and so good! 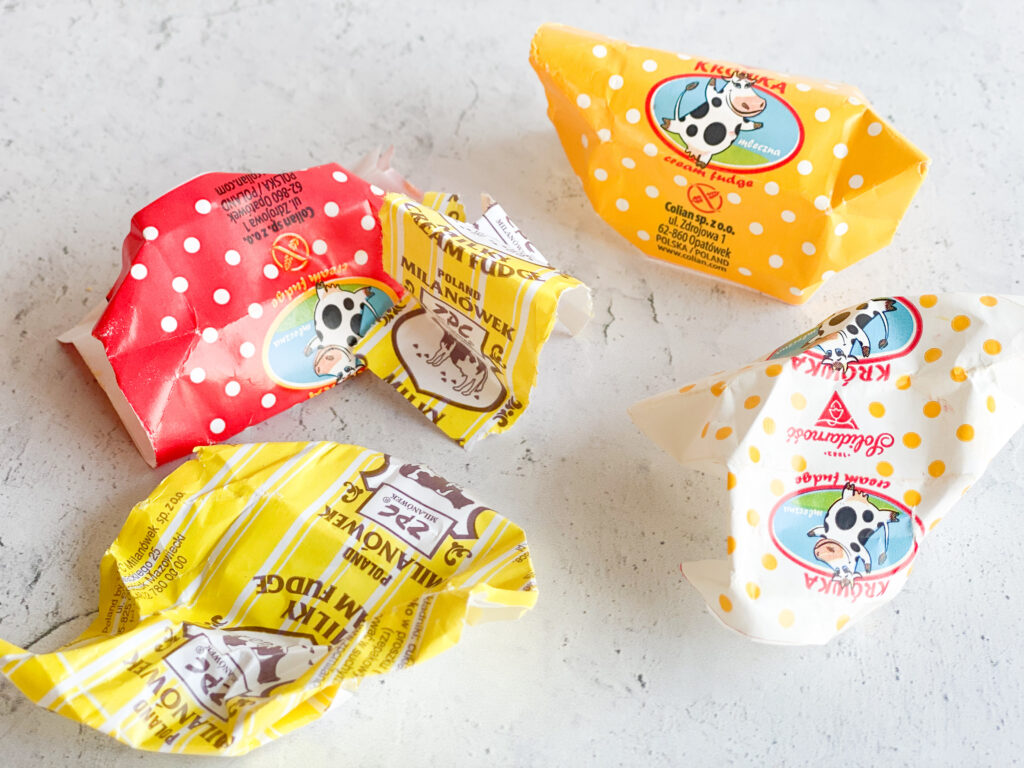 There are many variations on this recipe. If you look, you’ll see that some use canned evaporated milk, some heavy cream, some whole milk, and in my case, I’ve used sweetened condensed milk, inspired by Ania Gotuje, one of my favorite food blogs written in Polish.

The recipes that I read in Polish, (who am I kidding?) I should say the recipes that I translated from Polish, all refer to cooking the fudge for an amount of time. Typically, that it will boil after 10 minutes (mine took 18) and that it should boil for 20 minutes. In both cases, I cooked longer than that, 35 and 25 minutes respectively in my two batches. I think the time has a lot to do with the differences in stove settings and your altitude.

Fudge was one of the first things I learned to make as a young girl. This is different than the chocolate fudge I made as a child. The texture is a little softer.

I’ve heard people who have a lifelong love of krówki talk about how the outside gets a little dry and grainy, and the center remains soft and caramel-like. That’s what I’ve tried to recreate here. After two tries, I’m really close. 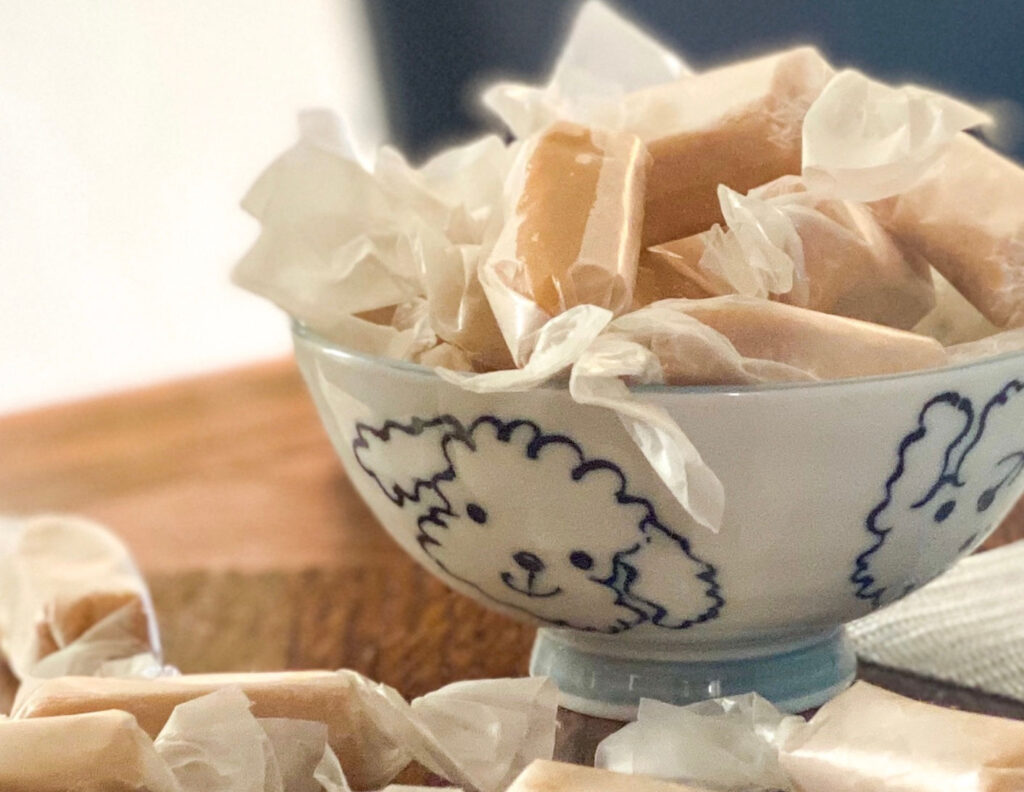 My first batch of krówki

I tried to make it like the fudge I grew up with. The first time, I cooked it to the softball stage 235° F or 113° C. I checked the temp with an instant-read thermometer.

A detail I want to mention here is that the temperature is not perfectly uniform throughout the pan. As I moved the thermometer through the boiling mass, I would occasionally see it spike up to 235, but only for a split-second, most of the time the reading was about 225. When the temp was constantly showing 235, I saw a spike to 245 and pulled it off the heat immediately.

After cooking, I tried beating it until the texture was too stiff to continue. It made a beautiful cream fudge, but it wasn’t quite krówki. If I’m perfectly honest with you, I think this technique makes a better candy, but it’s different than the familiar brands of krówki.

The first version of my fudge, was firm and creamy, not at all grainy. It was not sticky and did not have that caramel-like texture. You can see in the photos that it did not self-level in the pan. Here in Arizona where the air is dry, this fudge could be stacked up on a plate and not stick together. In more humid locations, you might have a different experience. 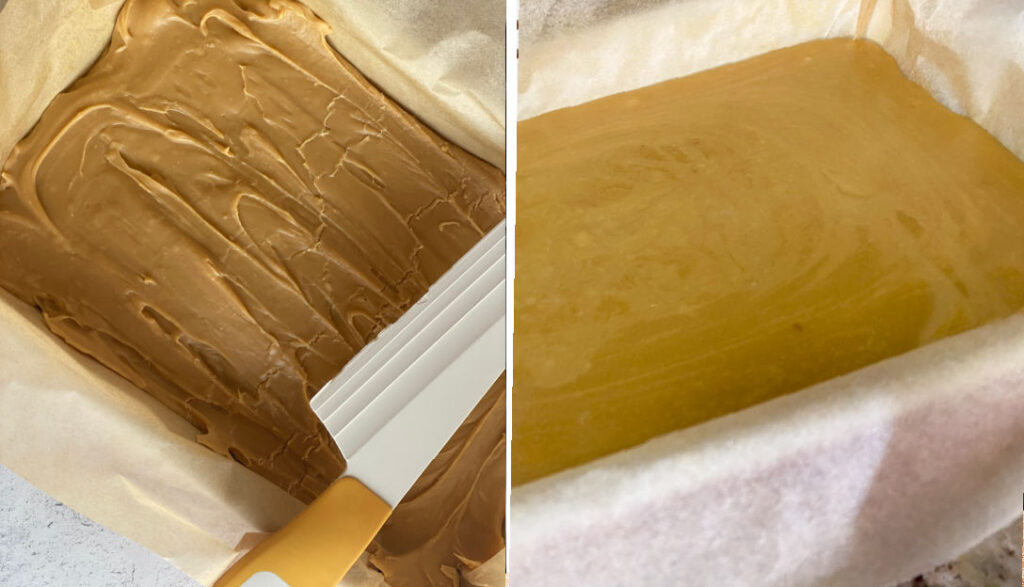 My second batch of krówki

The physical sign that I used to indicate that I should take it off the stove was that it had become thick enough that I could briefly see the bottom of the pan as I ran my flat bottom wooden spoon through the pan. One of the Polish bloggers referred to the texture becoming like pudding when it was finished. In my first batch, I cooked for 5-10 minutes beyond this point.

After removing the pan from the heat, I only stirred enough to incorporate the butter for about 3 minutes. The changes led to a more authentic outcome. When poured into the pan, the mixture was smooth and level. When pulled apart, the center had the desired caramel-like texture, but he outside was somewhat soft and sticky. It wasn’t easy to cut and separate the pieces.

For this reason, I didn’t slice and wrap the pieces right away. I wish I had. As it sat in my fridge for a day, the fudge dried a bit, emphasizing the grainy texture that we all know and love. It was easier to slice, but it was no longer soft enough to pull like caramel when you broke a piece in two.

Next time, I will use this method and wrap the candies (sticky or not) right away. My thought is to let them age in the wrapper for a day before moving the wrapped pieces into a sealed container.

If you’ve found the perfect technique, let me know in the comments. Cooking is a team sport! 😉 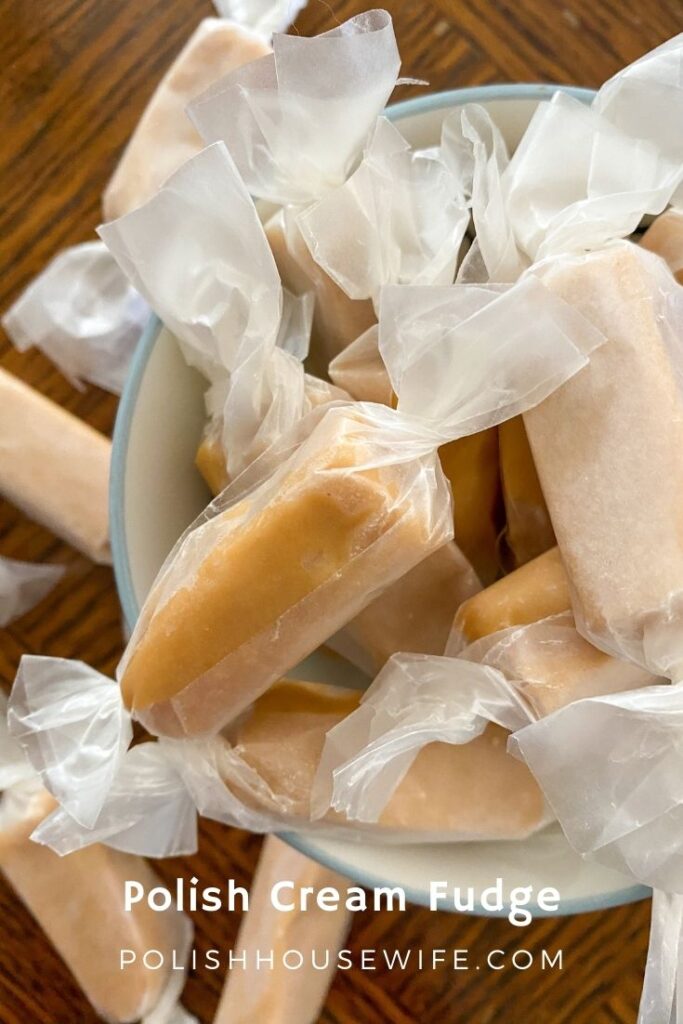 Once your Polish cream fudge has been chilled and firmed up, you need to slice it into individual pieces. Making this recipe in a 6 x 9-inch pan, the fudge will be about 1/2 inch thick which is ideal. If you don’t have a 6 x 9 pan, maybe an 8-inch round cake pan? A different size just means your fudge will be a little thicker or thinner.

I tried to slice it into small oblong pieces like those you buy, 1 1/2 x 1/2-inch. That’s a lot of little pieces, 68 – 72 depending on how precise and consistent my cutting was.

I started off wrapping a few pieces in parchment paper, both the traditional folded ends and twisted. I tried doing a few with parchment paper and thin wrapping paper for a more colorful look. Wrapping the candy is a good way to go if it will be traveling, a treat packed in a lunch box. I also wrapped it in waxed paper with twisted ends. I liked this result best. I simply cut waxed paper (when did it become so thin?) into pieces that were 4 x 6 inches. You can also order waxed candy wrappers on Amazon.

As I was doing this, it occurred to me that this would be a good pastime if you had several people wrapping the candy. Kind of like making pierogi, many hands make light work. It was at this point, that I decided to gather up my sliced pieces (the firm batch) and simply put them in an airtight container. They’ll look very nice piled on a small plate to be served as a sweet nibble at the end of a meal. If you have a sticker consistency, they should probably be wrapped, otherwise, they will keep trying to reattach to each other.

Even though this is a work in progress, the first two batches did not last long. I hope you’ll enjoy your Polish cream fudge as much as we did!

PS – if you are a fudge lover, like me, check out the Scottish Tablet (whiskey flavored fudge) that I made after a trip to Scottland. 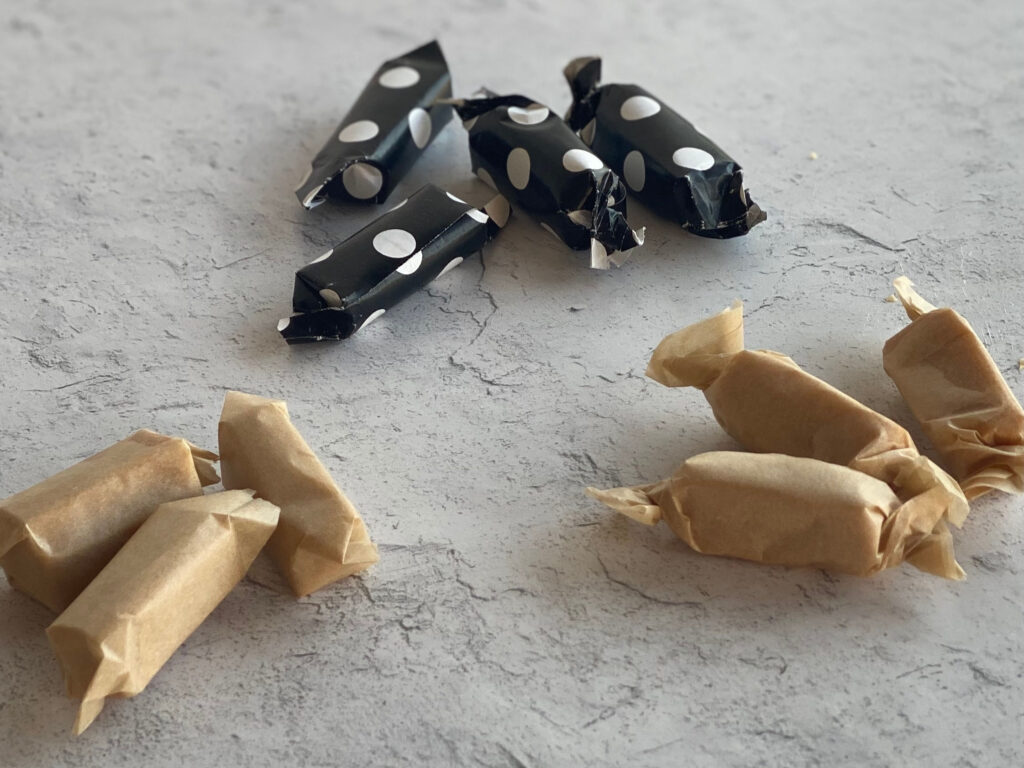 Krówki – Polish cream fudge is simple to make, creamy and so delicious.

Add a pinch of unsweetened cocoa powder with the sugar and sweetened condensed milk if you like. It will do more for the color rather than the flavor.