When we lived in Poland, I was lucky to have Polish friends who invited me into their kitchens. I learned so much from those sessions. I would have loved to have found a formal Polish cooking class, but I never did encounter a Polish cooking school.

When we planned our last trip to Poland, I found myself with a couple of free days as my husband left for the Ryder Cup in France. I searched online for cooking classes in Poznan and Warsaw. The most promising was Polish Your Cooking (you can let your browser translate or click on the Union Jack in the top right corner for the English version of their website) located in Warsaw, and it became the main reason behind my trip to the Polish capital. I brought home a few goodies from the school that I’d like to send to one of you, so keep reading! 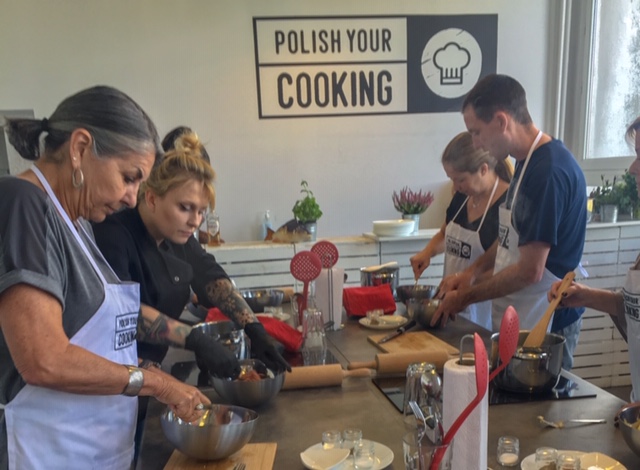 More than one of my friends was kind enough to ask if I was teaching the class when I mentioned the cooking class I was “doing” in Poland. I think my credibility is greater on this side of the pond, although, Ed did have a physical therapist in Poland who, after checking out my blog, told him that she needed to spend more time in the kitchen with her mother because it appeared that I knew more about Polish cooking than she did. Which was very generous of her, and hey, she’d been busy with grad school!

I want to say that no matter how much  you know, there is always more to learn, and that was my attitude when I signed up to take a class to make foods that I’ve already cooked at home.

Ed loves to tell people that I also signed up for the optional vodka tasting that was advertised to be after the cooking class. It  actually turned out to be part of our 4 hour cooking class, and that made a lot more sense!

When I searched for cooking schools in Warsaw, I found Polish Your Cooking on Trip Advisor. Then I checked out their website and registered on the school’s site. Within a day, I had an email in English confirming my registration. (As a side note, I’ll say that the email named the wrong month. I replied, saying that I looked forward to seeing them on . . .  and then listed the date of my class in Polish. I saved all the emails and took the lack of a correction as simply someone who probably speaks three or four languages, making a small, understandable error.)

The instructions the school sent accurately described the rather complicated path to finding their location. Even though I had the notes open on my phone. I still had trouble, and one of the security guards at the front door walked me to where I needed to go.

The trouble is that, like so many things in Poland, this business is located in an old building that was originally built for a different purpose. To give you a feel for it: you’ll turn left at the security desk, walk down the long hallway and then climb one flight of stairs, then you walk around the corner and take the elevator to the proper floor where you’ll find the school.

I searched for an AirBnb near the Polish Your Cooking, and ended up with a flat literally right across the street from the school and 100 yards from a tram stop which was very convenient for my return trip to the train station. 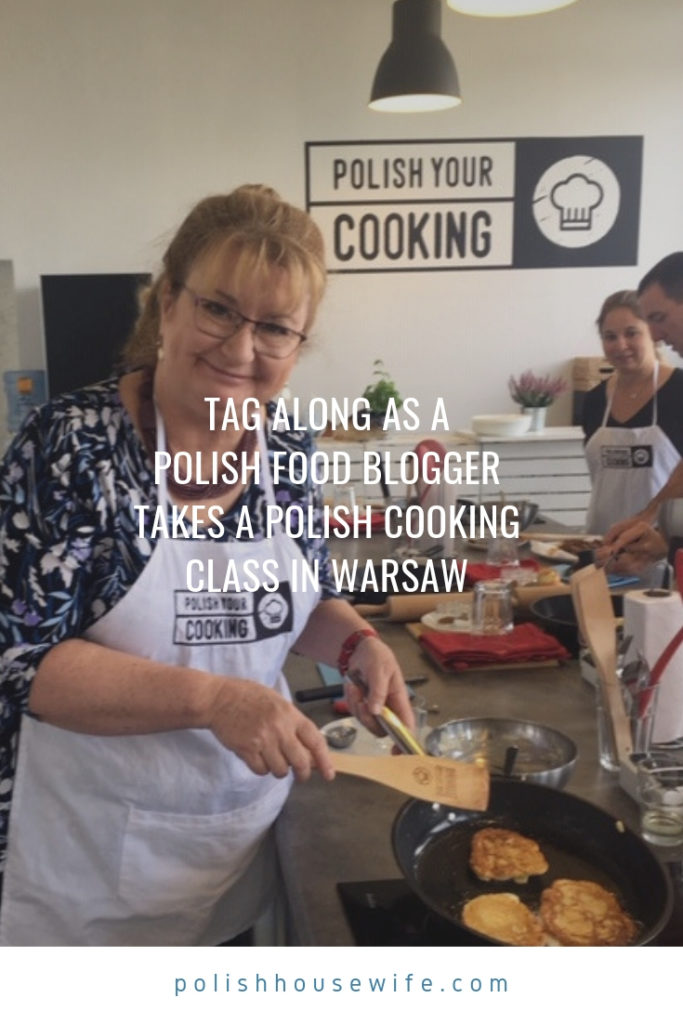 When I arrived, I met Madga, our chef and instructor. There were some young women assisting her in the background. Magda showed me where to help myself to coffee and tea, and directed me to the table where others were already seated.

At the table was a woman about my age, and a young couple. They were all from California. We were later joined by a mother and daughter, and a young woman traveling solo before meeting her brother in Munich for Oktoberfest. We were all from the states.

As the morning went on, our 3 Californians found another connection. As the woman, who became my cooking partner mentioned her hometown, the young man said, “oh, my aunt lives there.” As it turned out, his aunt is married to this woman’s dentist of many years. They ended up taking a photo together for him. It really is a small world.

The mother and daughter team were of Polish descent. The daughter was in Warsaw on business and her mother, who speaks Polish, joined her for a bit of family vacation when time allowed.

When asked why we had chosen to come to Poland, the young couple said “because we hadn’t been here yet.” It was a wonderful time with fun people who love to cook and love to travel, and an excellent teacher. We had a great time together.

Magda said that when her helpers read the class list the day before, they said this is going to be a fun group. Our instructor said that foreigners were her favorite students. The school also hosts Polish corporate team building events, and the last group she had worked with was such a group. The difficulty was that the young staffers thought they already knew everything about Polish cooking, so they didn’t pay attention to what she was saying, if they did, they argued with her and two even phoned their mothers for backup in order to impress their boss, only to find mom agreed with the chef.

In the interest of full disclosure, I participate in the Amazon Associates program, which means that if you make a purchase via the Amazon links below, I earn a commission at no extra cost to you.

As we enjoyed our coffee and tea, Magda served us a shot of wisniowka or cherry vodka and had us pair up, up one of the students partnering with her. We moved to the kitchen area, where we occupied only four of the many kitchen stations.

We had recipes and ingredients to make Polish apple fritters or pancakes. After each team had mixed up and cooked their apple pancakes, we took them back to our table when toppings such as honey and syrup had appeared along with a beautiful charcuterie platter of Polish sausages and cheeses.

While we ate the breakfast before us, our hosts served a shot of quince vodka, and we had a friendly competition identify several spices that are common in Polish cooking and sampled a hazelnut vodka. The competitions we had were fierce because the winner received a large Polish chocolate bar. 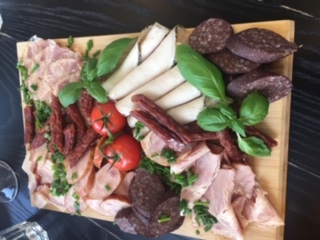 Then we returned to the kitchen to make pierogi. We prepared the dough, an eggless recipe that I liked very much. We mixed up two fillings, potato and cheese, and a meat filling. For the meat filling, we added a little bit of a premixed spice packet and salt to our ground pork. Magda demoed a few different ways to fold pierogi while we sampled a Żubrówka and apple juice.

We enjoyed our pierogi lunch with the a choice of Polish beers. With Pomp & Circumstance playing in the background, we all received our graduation certificate and a wooden spoon with the school’s logo. We toasted the occasion with a Polish martini, a shot of vodka with a pickle garnish.

All of the leftovers were boxed up in to-go or take away containers for those of us with refrigerators. The mom and daughter pair left for a museum, and the rest of us went our separate ways. I ambled across the street to my AirBnB to read (or sober up a bit) before an early evening visit to Old Town for a little souvenir shopping and a hot chocolate al fresco on a chilly evening.

All in all, the Polish cooking class was fabulous. I’m so glad that I went, and if you’re reading this, you probably share my passion for cooking, so I hope your future holds some cooking classes too, either in a friend’s kitchen or in the classroom.

Now for the fun part! I have an apron and a flat-bottom wooden spoon from Polish Your Cooking to send to one lucky reader. The deadline to apply is January 31, 2019 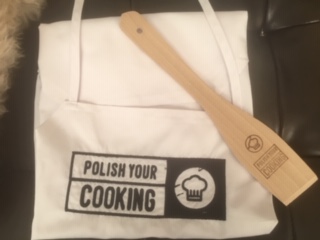 HOW TO ENTER THE GIVEAWAY