Soup is always on the menu in Poland and Christmas Eve is no exception. There will be at least one soup and quite possibly more for Wigilia. You could make Polish Christmas Eve Borscht or Barszcz Wigilijny and serve it in a cup to be sipped as a colorful and flavorful broth, or you might serve it in a bowl with uszka, little dumplings filled with a mushroom or mushroom and sauerkraut. 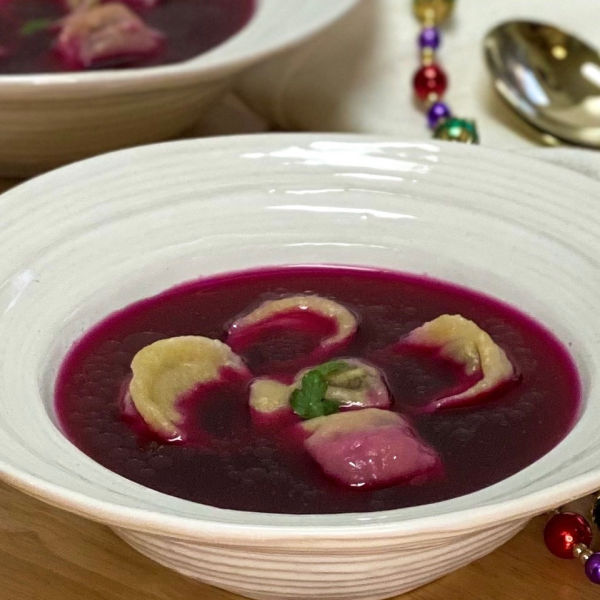 Polish Christmas Eve Borscht differs from everyday barszcz because we’re not using meaty bones to make the broth. Wigilia is a meatless meal, so we omit the pound of beef bones called for in my other borscht recipe.

The Polish version of borscht is always served just as a broth. If you want borscht with more substance, try this Ukrainian version that has a wonderful texture.

This recipe calls for a fermented beet mixture, zakwas z buraków, or beet leavening. It takes 5- 10 days for this mixture to ferment and be ready to use in the soup. You can make the soup without it, but it will be milder, less spicy. Without it, the broth will also be lighter. You can add a little vinegar or lemon juice to make. up for the tartness, and might try adding a clove of garlic or two to the soup mixture as you’re simmering it. If there is time, I encourage you to make the zakwas. It will give you the best result.

After the zakwas is added, you don’t want to boil the soup. The probiotics in the zakwas die at temps of 115° F or 46° C, so you’ll want to serve this at room temp or just above.

Heat will also diminish the beautiful red color added by the zakwas. So be careful about reheating.

If you’re looking for other Wigilia foods, be sure to check out this post on Wigilia recipes and traditions. 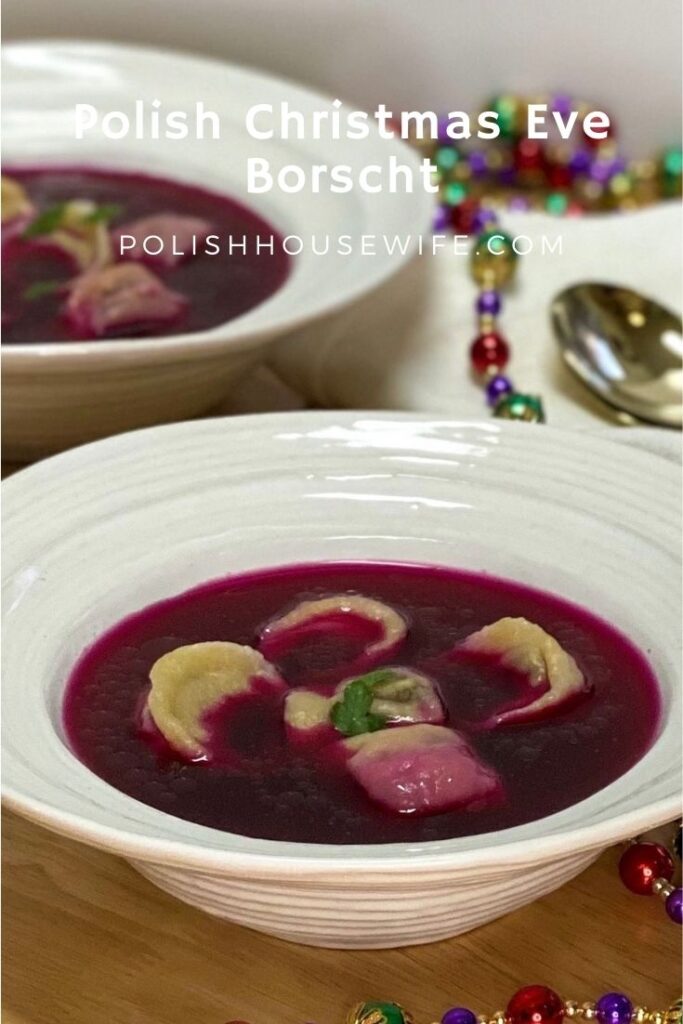 As a participant in Amazon’s Associate program, your purchases via these links generate a commission for the site at no extra cost to you. Thanks in advance!

In a cup or a small bowl, cover the dried mushroom with 1/2 cup boiling water, set aside.

Peel and slice the beets, carrot, and parsley root. Add to a Dutch oven or soup pot, along with the cleaned and sliced leek, allspice, peppercorns, bay leaf, and water or veggie broth. Bring to a boil, reduce heat to a simmer, and cover.

Pour the soup through a colander placed over a large bowl. Press the veggies to get all of the liquid out. The veg can be discarded at this point. To the liquid, add the sugar, salt to taste, 1 cup of beet zakwas, and the mushroom liquid. The reconstituted mushroom can be used in another recipe.

Your soup is ready to serve. If you need to reheat, just warm, don’t boil.

The excess zakwas can be used in another recipe or it is a popular drink as is.

If you can’t find parsley root, this site has some substitutions.

Keep the soup temperature under 115° F or 46° C, to preserve the vivid color and the probiotic benefits.