Before I tell this tale, let me say that Poland is one of the safest countires you can visit according the US State Department and my own experience. I felt safer walking the steets of Poznan than I do in my hometown in Arizona. That being said, I was unlucky enough to cross paths with pickpockets in Krakow.
We had friends visiting from Arizona and were very happy to be showing them around Poland. They wanted to visit Kraków; doesn’t everyone? This was my third visit to Poland’s most popular tourist destination, and I came home without my wallet. While Kraków has it’s attributes, I’ve always felt that Poznań (our home away from home) had just as much to offer. I’ll be preaching that with even more conviction now because, my friends, there are pickpockets in Krakow. 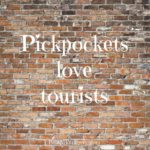 After cancelling my debit/credit cards from our bank at home as well as our Polish bank, and picking up forms this morning to replace my resident permit and my tram pass, the American Consulate in K-town called. “Someone who didn’t wish to identify himself,” turned in my wallet, which no longer contained złoty, euro, and dollars, but thankfully, everything else seems to be there. It had been found in a trash can.
I just saw a post on Trip Advisor about a woman who chased off a group of four men trying to take another woman’s wallet. Our friend thinks this might be what happened to me. He remembers a group of four or five young men lingering behind us while we visited a vendor in the Old Square that just seemed out of place to him. (I’d like to make it very clear that my wallet was in my purse which was on my shoulder; it’s not like I sat it on a bench and walked away to take photos. My three traveling companions were just as shocked as I was.) I also remember someone bumping into me as we walked from one part of the square to another. It stuck in my mind because he said “sorry” not przepraszam (the difficult to pronouce Polish equilavent). Maybe this is when it happened.

Even though the thieves were only interested in cash, they were professionals, very smooth. I’m surprised that the police don’t do more to protect tourists and to keep the city high on the popularity chart, but during my Euro volunteer training, I learned that police activity here is different than what I’m used to. It seems to generally be much too passive and occasionally much too brutal. If I can now spot the tram police before they pull out their credentials, you’d think law enforcement officers could spot a team of pickpockets.

I’m sure Poland is no more prone to pickpockets that any other place, but remember when you’re in crowded touristy places in the big cities to take extra care. Our dentist lost his wallet to a pickpocket in the Warsaw train station, and looking back he said that he’s knows exactly when it happened. There may be pickpockets in Krakow and Warsaw, but I’ve been fortunate enough to miss them in places like New York City.

PS – last year, I registered online with the US Embassy in Warsaw.  I get emails about security concerns, and it made my contact information available to the workers at the consulate.  Apparently, the contact information I supplied with my resident card application isn’t available to them.  So if you’re living or spending extended time abroad, be sure to register with your embassy!