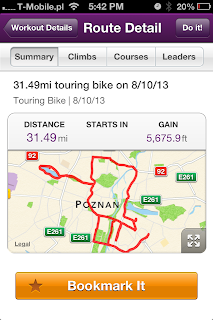 We did our longest bike ride yet over the weekend, but still less than the shortest route in El Tour de Tucson, an annual perimeter cycling event in our home city

You see all kinds of interesting things when you’re out and about on a bike. In addition to our wild boar sighting a couple of weeks ago, we came across:
–a guy riding his bike with no hands because he holding a 20 pound dog in his arms
–an old woman riding around the lake smoking like a chimney
–Jez Rusalka – Lake Mermaid in English.  A beautiful spot with a nice path through the forest around the lake – some much needed shade on a hot day, enjoyed by families with strollers, dogs, fishermen, as well as cyclists. (No nudist sightings for those of you who know the lake)
–a stadium named Olympia, using the Olympic rings, that seems to have no connections to the Olympics
–some interesting fungus growing on trees

As we’ve been traipsing through the city, I’ve been so impressed with the many beautiful parks we’ve ridden through.  You don’t go far at all in Poznan without finding a green area, many very sizable.  They’re nicely kept up, with benches, some with clusters of exercise equipment for adults and playgrounds for children.
Coming from the desert, I’m still in awe of all the greenery and water in Poland.  There are so many rivers and lakes, and of course, everyone spends some time at the Baltic – “for their health.”  All that water brings me to some sad news in the New Poland Express.  A drowning incident claimed the lives of four siblings in the Warta River last week.  Over 300 have drowned in Poland this summer alone.  One is too many, but this number seems extraordinarily high. 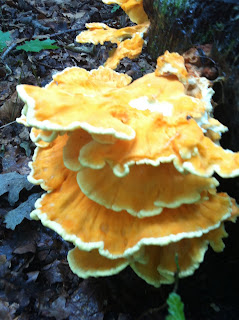