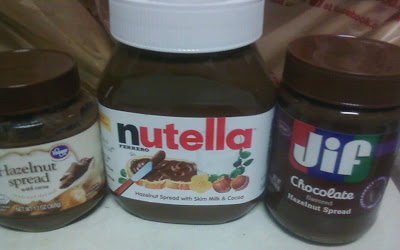 Nutella has been a popular staple in our kitchen for decades, but I’ve recently learned that some people have yet to try this chocolatey hazelnut spread.  My friend, Elaine, succumbed just last week.   Have you been hesitant because you weren’t sure how to use it? 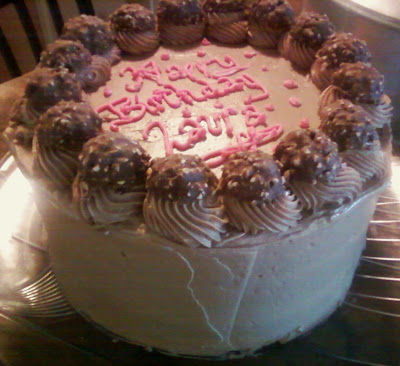 I mix a jar with an Italian Meringue Buttercream for my favorite chocolate cake topping, stir it into a cheesecake, spread it on a slice of toasted brioche, or the classic – by the spoonful straight from the jar to quench a chocolate craving.

I learned recently that Jif has created their own chocolate hazelnut product.  So when I went to buy a jar of Nutella for my sister’s birthday cake, I decided to conduct my own taste test – also picking up my store’s house brand.  The things a food blogger will do in the name of science.

The results:
I have to tell you that the three varieties I tried have identical ingredients, but the calories differ indicating the proportion aren’t exactly the same.  I would not be able to differentiate between the three on flavor, but the textures varied enormously.

Kroger – the runniest of the three, with the consistency of karo syrup.  I don’t think I’ll buy this one again.
Nutella – thicker than the Kroger brand, the Nutella was creamy and my favorite straight from the spoon.
Jif – the thickest, stiffest texture, and the highest in calories.  I used this spread in my frosting because I’ve always feared that my tasty addition made my buttercream too thin.  The stiffer spread gave me a very workable texture and I’ll use the Jif brand again in this way.

I hope you’ve been tempted.