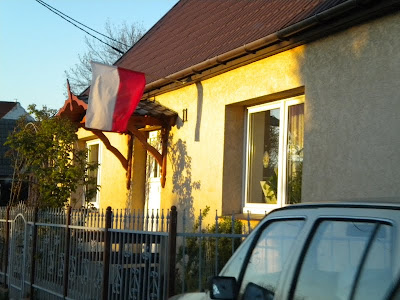 May holidays in Poland — flags have been popping up everywhere in the last few days, on homes, utility poles, even public transportation.  The month of May begins with a string of holidays in Poland. In post-Soviet times,  May 1st has been officially titled “State Holiday,” but it’s celebrated as Labor Day.  This year, May 1st fell on a Sunday.  Officially, there are no Mondays off for weekend holidays. 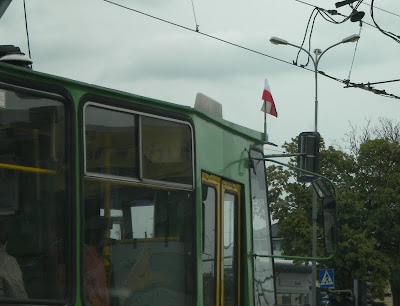 May 2nd is flag day in Poland, it’s not a “day-off holiday” on its own, but since it’s sandwiched in between to holidays that are, it is often taken as a part of what is referred to as the 3-day May Day Picnic. When the holidays fall mid-week, it often turns into a 9-day picnic.
May 3rd is Constitution Day, celebrating the May 3, 1791 signing of Poland-Lithuania Commonwealth constitution – Europe’s first national constitution and the world’s second (a few years after the U.S. constitution.)
In addition to the red and white Polish flags, we’ve seen several yellow and white flags.  I believe these are Papal flags, no doubt commemorating the beatification of Pope John Paul II (originally posted 2011).
Wanting to follow Polish tradition, we took off for a long weekend.  We headed north to Wolin Island on the Baltic Sea and visited Amber Baltic Golf Club in addition to other sights.
We traipsed through the beech forest on a long and winding trail hoping to see Bison at Wolin National Park, a bison reserve, but alas they were closed for the holiday.  Normally, I would think that we had simply missed a sign (in Polish) in the parking lot saying that we’re closed, but there were a lot of Polish people as surprised as we were to find the gate locked.
We also walked out out on the pier at Międzyzdroje. It stretches 395 meters (432 yards) into the Baltic. The day we visited, was very cold and the wind was howling, and yet there were diehards sunning themselves in the beach. The things people do for their health!
Pozdrowiam!
Lois