We spent a couple of nights at the Hotel Wyspianski (3 stars) recently.  The rooms were well furnished (other than the twin beds) and they offered parking which is often difficult to find.  The real star of our stay was the hotel restaurant.  The complementary breakfast was the best I’ve eaten at a hotel in Poland, and that includes the Intercontinental in Warsaw (4.5 stars). 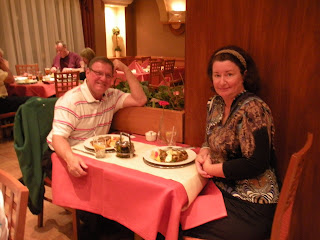 Because the breakfast had been so exceptional, we didn’t mind staying in on our second night for dinner.  After walking 9 miles during the day, not leaving the building sounded very appealing.

For a starter, I ordered a salad which sent our waitress into a tizzy.  Surely, I was mistaken.  I couldn’t want a salad for a starter; it wasn’t enough.  It was more something to have on the side of a main course, but if I insisted she would bring it.  She also offered to bring some bread and butter since I was eating so lightly.  Unfortunately, the bread didn’t arrive until after we’d finished our starters. 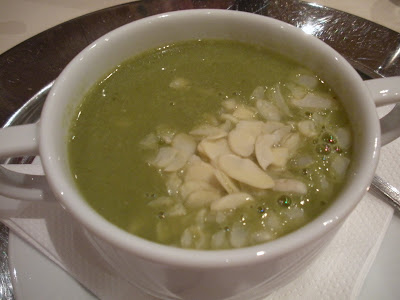 My husband ordered a green salmon soup, which was very tasty and an appropriate starter. 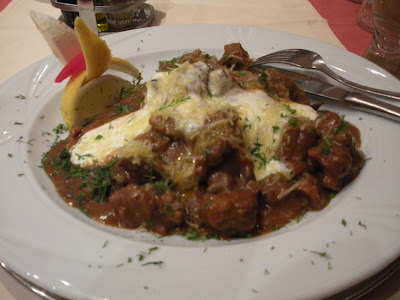 I had goulash served over potato pancakes.  Oh, how I wish their chef would teach me to make potato pancakes.  Mine never turn out so well.  The favors were fantastic together.  I may have to make a few changes to my own goulash recipe after this. 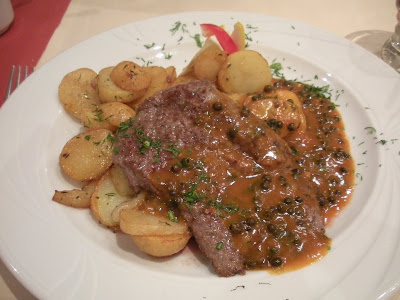 My husband had a pepper steak with Polish potatoes (cooked with bacon and garlic). 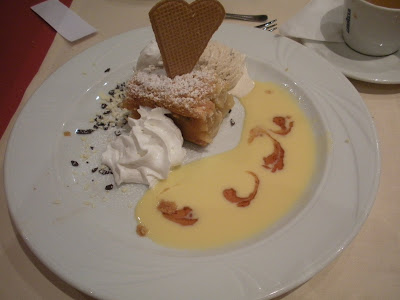 For dessert, my husband had apple pie with a white coffee. 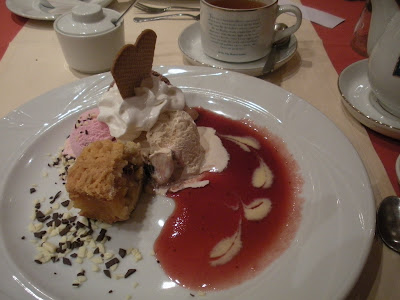 I ordered the strawberry mousse, which wasn’t really a mousse at all.  Some things get lost in translation.  It was a delicious strawberry puree served with a small piece of apple pie and three scoops of ice cream.  Before the night was over, I had to rock the boat one more time by ordering herbata (a cup of hot tea) with my dessert.  Our waitress looked shocked, questioned my decision; I might think that tea after dinner in Poland is just not done if it weren’t for the fact that when we’ve dined with Polish friends in their homes, they’ve offered both coffee and tea after dinner.

I think our young waitress could take a lesson from my brother, Dennis, who, before he became an attorney, used to wait tables in a fine restaurant.  As he served a bottle of white wine to Tug McGraw and his party one evening, Mr. McGraw asked, “Aren’t you going to decant it?”  Without missing a beat, Dennis said, “Of course, sir.”

The cost for this meal with two cocktails and two bottles of still water: $45.  The bottom line is fantastic food even if the wait staff could use a little more training. 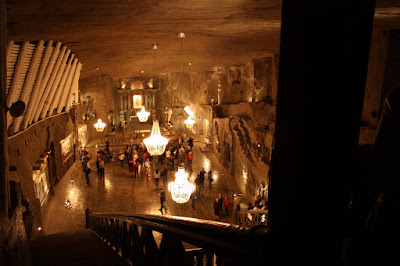 One of our reasons for being in Kraków was to tour the nearby salt mine.  The mine is no longer an active source of source of salt; it’s now cheaper from the Baltic Sea.  The miners left behind beautiful carvings, and many of the “rooms” have been repurposed into an art gallery, a chapel and this grand sanctuary in which mass is held every Sunday morning.