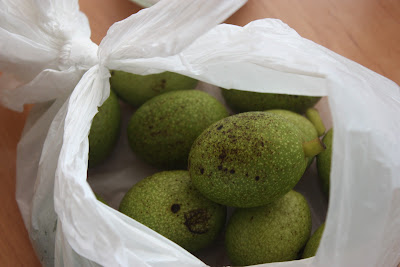 Last winter our friend, Grzegorz, stopped by and sampled my wisniowka (as he called it), a homemade cherry liqueur.  I think he was impressed not only by the drink, but by the fact that an American was taking part in this popular Polish pastime of making liqueurs.

He said that I must try making orzechowka, a green walnut liqueur.  He was so keen on the idea that he phoned his mother to get his aunt’s recipe.  I jotted it down in my iPad notes with a reminder to get in touch with Greg next May.  He promised to bring me a bag of green walnuts from his aunt’s tree.

It’s been a mild summer, so it was late June before Greg popped round with the green walnuts, which look more like a lime than what you’re used to seeing in the nut bowl at Christmas.

I’ve followed the directions to start a batch of the Polish family recipe.  Rather than make a huge batch of this liqueur, because we’re moving back to the states in 6 months, I decided to search the Internet to what else people do with green walnuts.

I have small batches of several recipes going thanks to Agrarinista.  I’m trying an Italian green walnut liqueur as well as the Polish version.  The main difference seems to be that the Italian version will include spices.  The walnuts that are in the brine will go on to become green walnut ketchup, green walnut chutney, and pickled green walnuts.

I’ll do separate posts as we finish and sample everything, but I wanted to mention this now, in case you have a source of green walnuts but aren’t sure what to do with them.