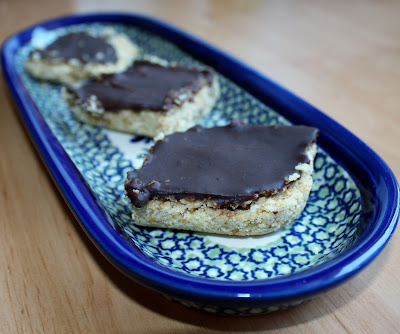 I caught a rerun of the Sesame Street Quickfire Challenge on Top Chef All-stars last night, and stayed up later than we intended to watch it.  The muppets were of course, very cute and funny, but what really enjoyed was watching the chefs’ reactions to the characters.  It was a happy, fun side of the competitors that we don’t usually see.  The all-stars are all young enough to have grown up with Sesame Street and some now have children watching the show.  I’m sure it was a very special moment for them.

Back to the food and a little TC gossip- Dale won the challenge with a cookie he made by crushing up potato chips and pretzels and covering it all with  chocolate.  It was so crazy; I had to try it.

I think my sister told me that Dale has been through anger management since his season on the show.  I haven’t caught all of the episodes, but it seems like it’s working for him.  He seems more effective and less distracted by the others.

Thankfully, the recipe was available online.  His measurements for the main components are not precise, so I’ll tell you what I did (European packaging) in my attempt to make half a recipe since I’m working in an apartment kitchen rather than a commercial kitchen.  It’s enough for a household, even if you are feeding a cookie monster. 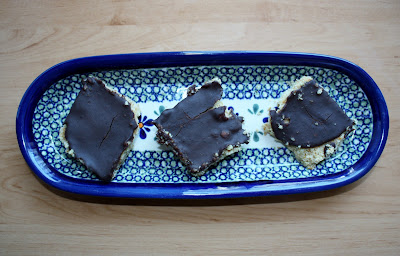 300 grams pretzel sticks
310 grams Lays potato chips
1.5 ounces flour
5 ounces sugar
1 pound butter, melted (I only had 10.5 ounces, so that’s what I used, and they were too crumbly – crazy as it sounds, you really do need a pound of butter)

For ganache:
5 ounces sugar
1 quart heavy cream, (I only had a pint, so that’s all I used and the ganache was still runnier than I would have liked.)
8 ounces chocolate, chopped

Preheat oven to 350 F (175 C)
Crush pretzels and potato chip.  Turn them into crumbs in food processor.  It works best if you have some of each in the bowl.
Combine crumbs with butter, flour, and sugar.
Press into a baking sheet and bake for 10 minutes.

For ganache:
Melt sugar in a pan, it will become liquid and caramelized.
Stir in cream, bring to a boil.
Remove from heat and add chocolate.
Allow both the cookie and ganache to cool.  Spread cookie with ganache.
Cut into squares of use a round cookie cutter.

Note:  We found these were best the day they were made.  The crumbs still had a unique, identifiable tastes and texture that was surprising and compelling.  (As in, I need to taste that again because that was pretzel!)  The second day, everything seemed more uniform and it lost part of its charm.