My first soufflé!  OMG!  It was amazing.  When it came out of the oven, the crusty top was tilted and a good 3 or 4 inches above the top of the dish.  After snapping a few photos during the process, the battery in my camera chose that minute, the grand finale, to die.  Silly me, rather than immediately grab my cell phone to get a photo, I took the battery out and put it in the charger before that Plan B occurred to me.  It lost a bit of volume during that 5 minutes, but the texture was still light and fluffy. 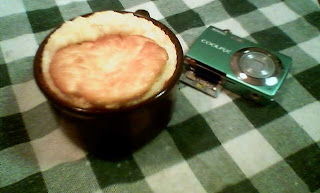 This is another “recipe for one,” but you could make multiple individual soufflés by increasing the ingredients.  Any straight-sided, oven-safe dish with 2 cup capacity will work for a single serving.  To make a large one to serve many, you will need to increase the baking time.

Variations: you may add 3 T. of finely chopped cooked green vegetables, sautéed mushrooms, or minced ham, in which case reduce the 1/3 c. of cheese to 1 T.

Smear 1/2 t. softened butter around inside of a soufflé dish, and sprinkle grated Parmesan over it.    (I only had shredded Parmesan, so I put it in the food processor for a couple of minutes).  Preheat oven to 425. 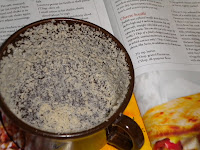 Melt 2 t. butter in a small saucepan, and stir in flour.  Let cook over low heat for a minute, then remove from heat.  Pour in milk (I used skim), whisking vigorously, and return to medium-low heat to simmer for a minute, stirring constantly as the sauce thickens.  (I didn’t notice a lot of thickening).  Season with salt and paprika (I used a generous sprinkle of paprika, after all, paprika is my new favorite potato chip flavor).  Remove from heat, and whisk in egg yolk.

Put egg whites in a very clean bowl and beat until they form soft peaks.  Add a dollop egg whites to saucepan, and mix in along with about half of grated cheese (I used Sargento Reduced Fat Sharp Cheddar).  Fold in remaining egg whites and cheese; transfer everything to the prepared dish.  Place dish on a baking sheet, and set it in the middle of the oven. 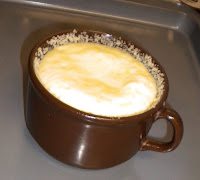 Turn heat down to 375, and bake 18 minutes, until soufflé  has risen and top is lightly browned.  (I took mine out after 18 minutes, and I was afraid that it might not be done.  I don’t like undercooked eggs, but it wasn’t a problem.  The fluffy eggs were definitely set and no longer wet.  I think it might have been the appearance of the melted cheese that made me think it wasn’t quite done. Trust the timer.)