Another “dish for one” from Julia Child’s editor.  She created this while working late one night on a cookbook manuscript when Julia  said, “You make a nice little potato dish while I fix the meat.”

My camera battery died, so this is from my cell phone.  Let me be the first to say that I need a perfectly seasoned 4.5 inch cast iron pan and a food stylist.  Even though mine don’t look quite as nice, the flavor is great, reminiscent of the potatoes at DJ’s Oyster Bar in Tampa. 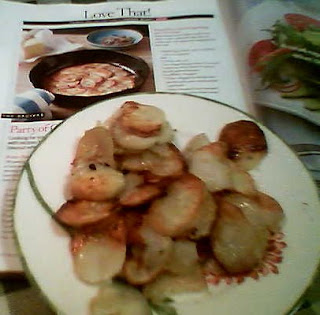 Source: Judith Jones,  O Magazine, October 2009
Ingredients
2 new potatoes, 6 oz.
salt
4 tsp. butter
pepper
Directions
Peel potatoes, and slice very thin, 1/8 inch.  Peel and mince garlic, than mash it with a generous pinch of salt, with the flat side of a large knife until it is a paste.  (I used a mortar and pestle.)  Work in about 1/2 t. butter.
Heat 2 t. butter in a small pan (4.5 inch cast iron or other small frying pan) over medium-low heat; lay in half of the potato slices, overlapping slight, to fill the bottom. Lightly salt and pepper, and smear garlic paste on top.  Add rest of potatoes to make a second layer, again overlapping.
Cook, setting a small cover askew on top of pan.  After about 8 minutes, turn potatoes, which should be brown on the bottom, by setting a sturdy plate on top of pan and flipping them over onto it.  Heat rest of butter in pan, then slide potatoes back in and arrange them as neatly as you can.  Cook semi-covered for 5 minutes, and uncovered for a couple more minutes, at which point they should be done and browned, both top and bottom. (I had to cook a little longer on both sides and increase the heat just a bit).
Slide them onto a plate and serve with salt and pepper.
Thanks for sharing!