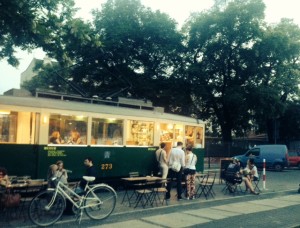 Poznan just got a little more charming! Cafe Bimba opened last month, just a stone’s throw from Plac Bernardynski.  The Poznan trams have a special place in my heart. So when we spotted a parked tram car turned cafe, we had to check it out. We’d been to the Stary Rynek, eating and drinking at Browarfest. We were actually on our way home, waiting for a tram at Plac Bernardynski when we saw Cafe Bimba, so we weren’t really looking for much in the way of food and drink.

It was a warm evening, and all of the outdoor tables were full. I was dreading the thought of sitting inside. An antique tram car without a breeze from moving down the tracks.  I thought it would be roasting inside with all that glass that had been sitting in the sun all day. We opened the door to go in, and I was thrilled with the blast of chilled air that hit me in the face — air conditioning! Well done, guys! 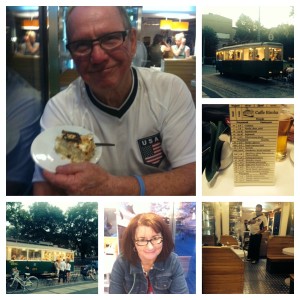 The interior of the tram has been beautifully converted, lots of chrome, but keeping the feel of the tram’s era. Kind of like the train dining cars that became diners in the USA before fast food became all the rage. I hope they have a great success because Cafe Bimba adds such an interesting spin to the Poznan cafe scene. The staff was friendly and helpful.

We had a water and a beer and split a slice of almond cake which was nice. They seem to offer a variety of beverages and the usual coffee shop fare.  I’ve read that the owner has other cafes and has plans to open a second tram cafe near Rataje.

So if you’re in the area, stop by. I think you’ll find Cafe Bimba charming too!