In addition to his many other talents, my husband is a golf professional.  That’s what took us to Bunnik.  The putting coach who has been working with the European Ryder Cup team (the winners) was doing a two-day putting workshop for several members of PGA Holland (and one American PGA member).

Our hotel was just a block from the golf center, so Ed had a very short walk to “school.”  He learned a lot during the training, and we learned something about Bunnik.  It’s kind of in the boonies, just an exit along the motorway.  The only restaurant was in our hotel.  If we had this to do over, we would have stayed in Utrecht with more options for the evening, and Ed could have taken the sprinter train everyday for the five minute trip to Bunnik.

We thought about flying to the Netherlands, but in the end we drove.  It’s about nine hours from Poznan, and other than a short stint where you’re diverted through a town, we were on divided highways the entire time.  In case you’re wondering, John Grisham’s The Racketeer was just the right audio book for the trip.  The unabridged version runs just under 13 hours.  When I haven’t planned ahead to get an audio book from my Overdrive app (there’s often a waiting list), I’ve been using audible.com.  Taking into account the times when we turned the book off to concentrate on traffic, GPS instructions, or the snow, the suspense took us from door to door.

The Nederlanders we met were delightful people, very helpful.  The food was OK, pea soup with smoked sausage is very traditional this time of year.  We had some nice meals, but nothing where I felt inspired and compelled to make notes in order to recreate a dish at home.  We did go through two packages of marzipan cookies – a recipe that I will seek out.  To be fair, a friend who visited Amsterdam recently recommended Five Flies and said we wouldn’t be disappointed.  It sounds like a memorable experience, but from their website, I could see dinner for two easily running over 200 euros.  We decided to pass this time around.

On my own for the first two days, I took the train into Amsterdam, seeing the Van Gogh collection in its temporary home at The Hermitage as well as their Impressionists and walked around the city.  I was amazed by the bicycles.  There were more bikes on the streets than cars or pedestrians, and thousands of bikes parked everywhere.

The second day, I took the train to Utrecht.  I exited the station towards the “centrum” and Hoog Catharijne which turns out to be a huge shopping mall that connects the station and downtown.  The downtown, centrum, of Utrecht is charming, smaller than Amsterdam, a pedestrian shopping area with the occasional canal, a church tower that serenaded with a carillon concert several times during the day, and, of course, lot of bikes. 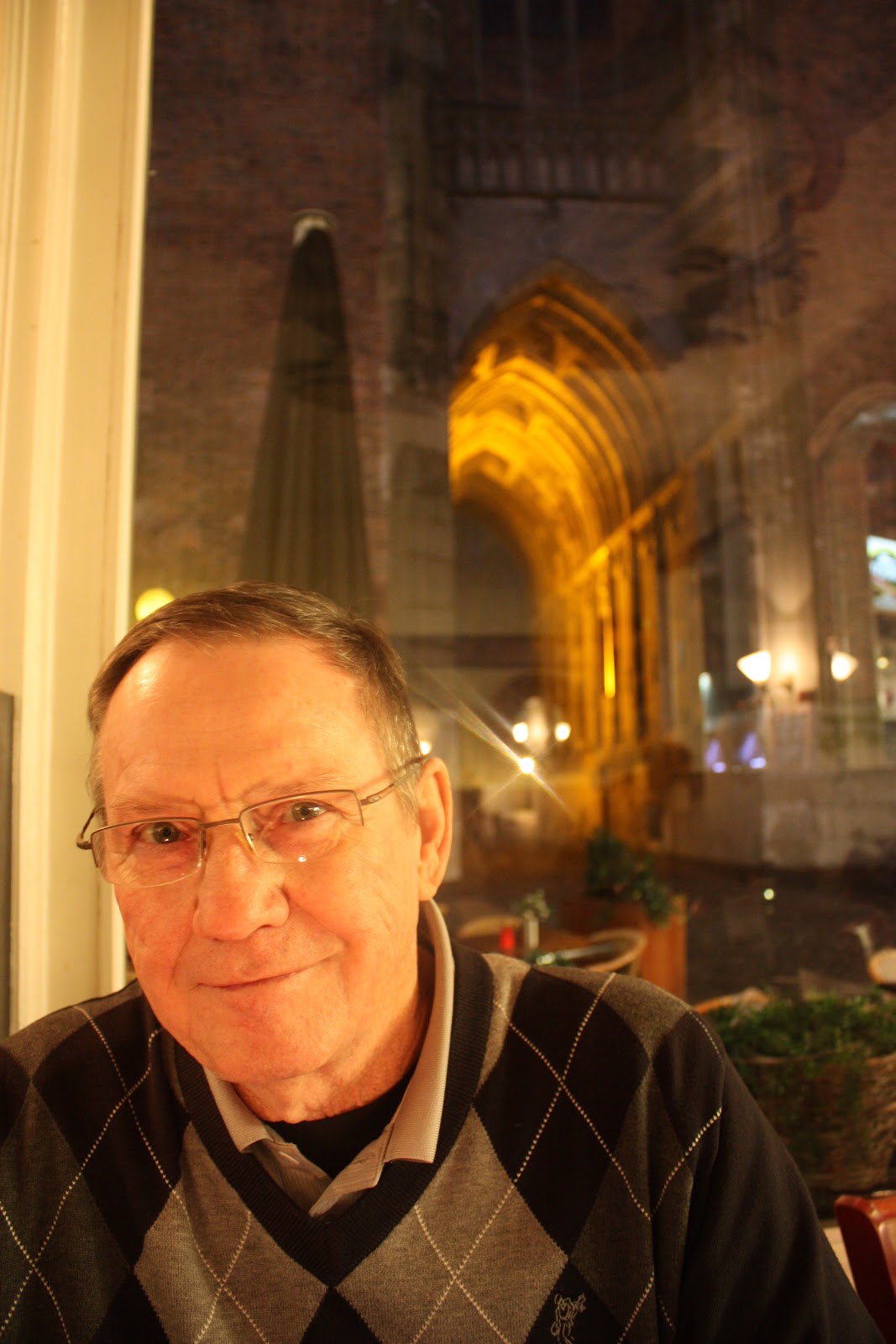 I also took in the Museum Speelklok, home to a large collection of self-playing musical instruments: music boxes, player pianos, the portable pieces played by organ grinders, and large fairground organs.  The venue can be rented for events.  We got to visit with a couple taking wedding photos, just an hour before their ceremony, as our tour went through one of the rooms.  We had a lively British couple in our tour group who treated us to a dance as one of the big fairground organs played The Beatles When I’m 64. When he’d finished class, Ed met me at the train station in Utrecht, we walked around the city for a bit and had pea soup in a local cafe.

After carefully studying the weather on Saturday and weighing our options, we hopped on the train for Amsterdam.  They were predicting snow in Germany, and we were trying to decide if we should cut our trip short since we were driving.  In the end, it didn’t sound that bad for Sunday and it wasn’t since we got an early start, encountering the snow during the warmest part of the day.

We took a canal tour of Amsterdam, our guide pointing out that the city doesn’t have the huge famous buildings (like you see during a river tour in Berlin), rather interesting architecture of common buildings that convey the city’s history.

While walking around the city, we stopped for coffee and pastry near the train station.  What a mistake.  Looking back, the wisest thing to say in a shop like that, where they’re not expecting repeat business, would be what’s fresh today or even yesterday.  My strawberry doughnut looked beautiful but had to have been from last week.  It was only fit for consumption by birds. (My daughter who has spent time in NL has since told me that all the donuts are bad; stick to the stoopwafel!) 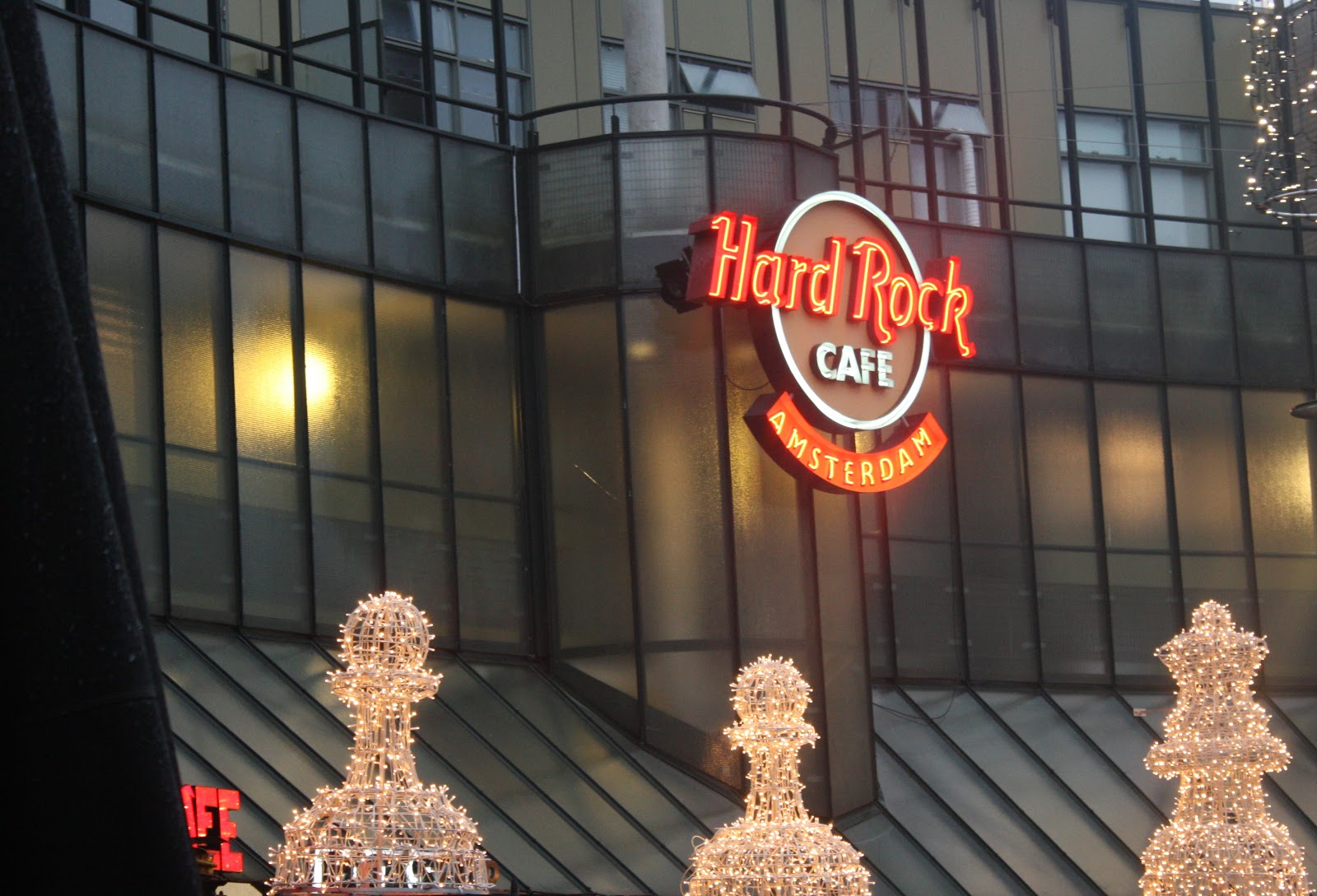 After that experience and tiring of pea soup, we opted for an affordable, predictable meal at the Hard Rock Cafe Amsterdam. 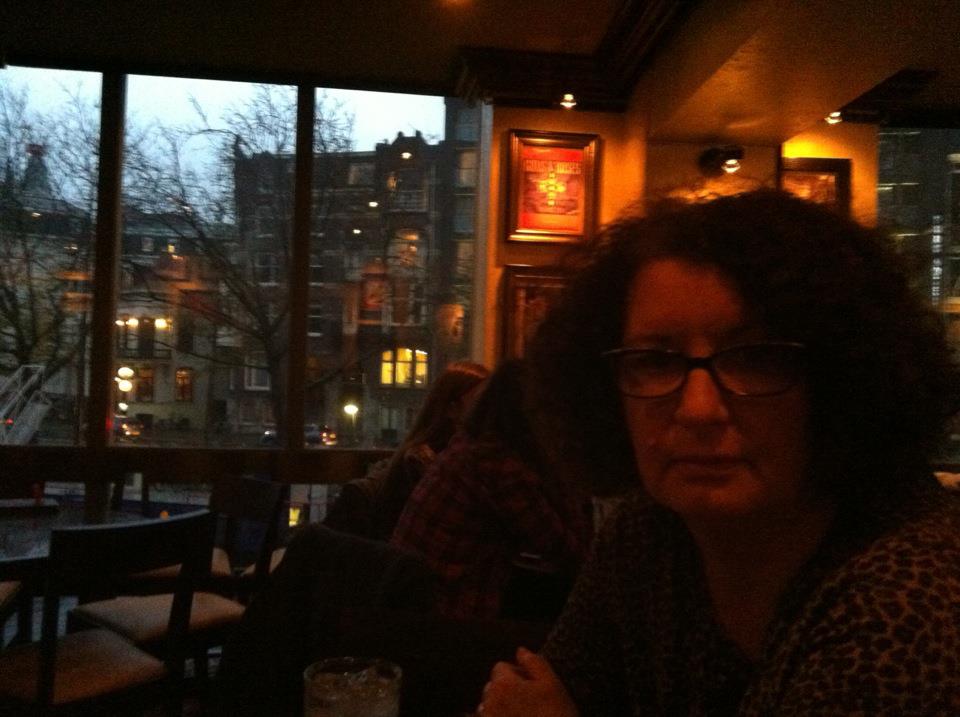