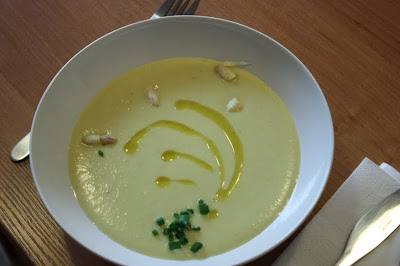 I bought fresh white asparagus for the first time a month ago.  When I found out that it had to be peeled before cooking (what a hassle!) I said that from now on, I would only buy green asparagus.

Last week, a farmer’s stand at the tram stop had white asparagus for 1 złoty (37 cents) per bundle, and I bought two.  I just can’t pass up a delicious bargain, even if the preparation is s bother.  Because it does have to be peeled, working with thick stalks is much easier than thin stalks.  With the skinny little ones, it seems as if you have nothing left after peeling. 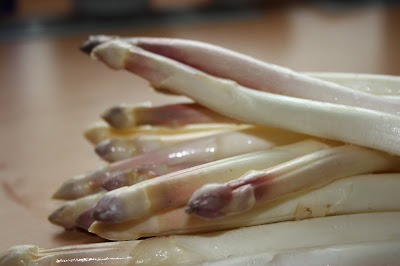 I used a food network recipe, and we all loved it.  Even Benson, our dog, likes his food more with a spoon full of asparagus vichyssoise.

The original recipe had me reserve the asparagus tips for garish as well, but I don’t think I’ll do that again. The crunch distracted from the rich creaminess of the soup, and visually, I found it more pleasing with just the oil and chives. I filled a teaspoon with oil and drizzled it in circular motions to get the pattern you see in the top photo.