The Poznan International Ladies Club organized a tour of the former Imperial Castle with an English speaking guide. If you want to do this, book the guide in advance. The cost in 2014 was 120zł or about $40 US dollars.

We have spent a lot of time at Zamek, but mainly in Dubliner, the Irish Pub.

We have been such regulars that when I ordered a steak to go for Ed when he was in the hospital, I asked if they would cut it up because we didn’t have a steak knife in the hospital room.

They wrapped up a set of flatware, including the steak knife, and said just bring them back next time you’re here.

Given my frequent but limited visits to Zamek, I hadn’t seen much of the interior, so joining the tour seemed like a great opportunity.

Our guide was fantastic.  He told us the history of the building and the many ways it has been used over the years during our 1.5 hour tour.

The castle (or palace) originally built for the German Kaiser is now a  cultural center and the larger rooms are used for events and exhibitions, so the rooms are empty, not furnished as they would have been in the past.

The imperial interior was destroyed by the Nazis as they prepared it to be an official residence for Adolph Hitler.  Much of the interior has been kept as the Third Reich left it.

Hitler never paid an official visit to Zamek but he may have been there, while the refurbishing was in progress.

A long balcony was added, facing the street from which it was planned that he would review the troops marching past.

Much of building was damaged during World War II, but you won’t know that by looking at the stone work today.

Parts of the structure that the Nazis did not have time to refurbish have recently been transformed into modern, state of the art theaters with an airy cafe covered by a glass ceiling.  This transformation has been a joint venture between Poland and the EU.

The Amazon links below are part of their Associate program, and your purchases generate a commision for this website. 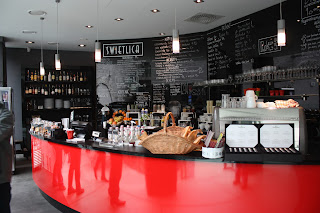 If you’re in Poznan, this is a must see!
Pozdrawiam,
Lois