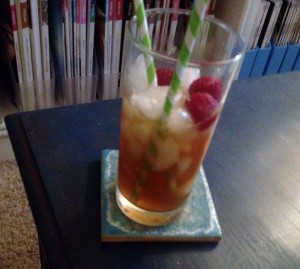 Keeping up with the retro-cocktail craze, here’s one from the 80s – the 1880s! Sherry Cobbler was one of the most popular summer drinks for most of that decade.  Cool and refreshing, packing less of an alcoholic punch than many cocktails, Sherry Cobbler is easy to enjoy, and one that I’ll be serving our guests.

I tried my first Sherry Cobbler Scott & Co. in downtown Tucson, a hipster, speak-easy style bar featuring artisan cocktails. Our daughter and I were having dinner at 47 Scott before seeing Jonny Lang at the historic Rialto. After our meal, she suggested we move next door to the bar because she loved their cocktails. We went down the long, maze like hallway that connects the restaurant and bar.

Like the restaurant, Scott & Co. is a small, intimate space. On a weekday evening, the tables were full, but the couple to our right were kind enough to move down and offer us both a seat at the bar. Because they’re known for specialty (labor intensive) cocktails, the sole bartender was very busy. After watching his artistry, my daughter made eye contact and requested our Sherry Cobblers. He efficiently worked us into the line up of several cocktail shakers that he was simultaneously preparing. The bar was dark enough that I didn’t even try to get a photo with my phone. So the one you see here is one I prepared at home.

If you find yourself in downtown Tucson before/after a concert or the theater, I highly recommend Scott & Co. Great drinks and you can carry on a conversation without shouting – what a nice change. If you want to shake up a Sherry Cobbler at home, as I’ll need to do now that I’ve returned to Poznan, here’s the recipe:

A cool refreshing retro-cocktail from the 1880s

Our concert that event also comes with high marks. I’d never been to the Rialto before, but I liked the venue, and Jonny Lang and his band put a terrific show. 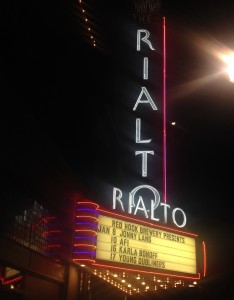