We’ve known  about our local basketball team for some time and have often talked about going to a game.  My husband even got to know one of the players when he first arrived in Poland.  Greg Surmacz, a Polish kid raised in Canada, lived near our apartment while he was playing on the team.  Ed and Greg would ofter run into each other at Friday’s.  Ribs used the be the Thursday special – very popular with young men who have been practicing all day. 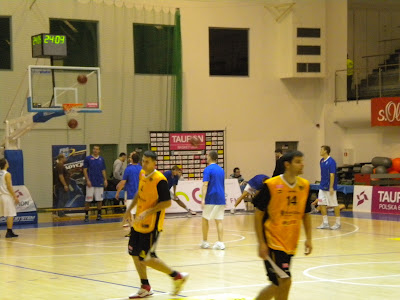 Why did it take us two years to finally make it to a game?  We’ve found navigating an English translation of the team’s website a little tricky. We weren’t really sure about their venue.  The website said many games are at AWF (that’s ah-voo-F, English speakers), but that’s a physical education university with a pretty large campus.  Where at AWF?  Where do you buy tickets?

We had motivation to finally figure it out.  Woody, one of our friends, is a big sports fan – even from Poznan, he closely follows our Tucson university’s athletic teams among others.  So of course, Woody knew when Jamal Horne, who had played his college ball at the University of Arizona, was signed by the basketball team in Sopot, a Polish resort town on the Baltic Sea.  And last night, PBG Basket Poznan was playing a home game with Trefl Sopot.

I have to thank my friend and Polish tutor, Amata, for helping us get tickets.  Let’s say that this week’s Polish lesson turned into a field trip, reading and translating many Polish signs along the way, so there was work being done.  Don’t think I got off easy and just scored tickets.

I’m glad we arrived at AWF early.  We did have some trouble finding the venue.  The first gymnasium we visited was hosting a basketball practice for the women’s team, but the good news is that we ran into three very tall American girls who were able to give us directions.  They’re over here just for the basketball season.  So we’ll have to make it to one of their games, now that we know half the team.

We had great seats; how nice to watch a game in such an intimate setting.  We were part of a very enthusiastic crowd of about 200.  The arena Jamal played in at the U of A holds 14,500, and we certainly couldn’t afford to sit in the third or forth row there.  It was a good game with teams that seemed very evenly matched in the first quarter.  As time went on, Sopot kept pulling ahead, and we cheered for Jamal and his team very quietly, “almost” silently.  Next time, Poznan, you have our full loyalty.