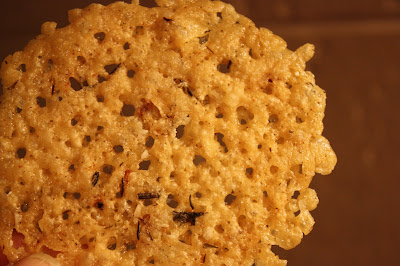 As we’ve been eating low carb, I’ve missed the crunch of a cracker, a chip, or a baguette. Tonight we filled that void with some Parmesan crisps to go with our salads. We were both pleasantly surprised with the result, a crisp, satisfying cracker-like crisp. I think next time I’ll make these much smaller and serve them with a spinach dip. I love lightly brown, bubbly Parmesan; it is the best part of French Onion Soup, don’t you think? 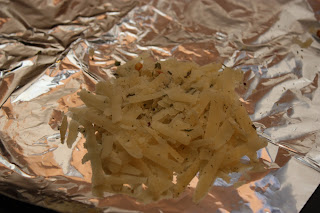 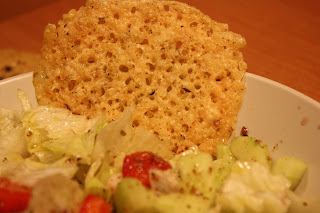 1 cup grated Parmesan cheese (I used the large side of the grater)
a pinch of the following herbs: dried parsley, dried thyme, red pepper flakes (this could be whatever you like)

PS- Some of our crisps seemed to get all of the spice. Next time, I may separate and shape the cheese first and then sprinkle it with spices. I think you could also shape these, as I have with almond lace cookies – while still hot, wrapping the circle around a wooden spoon handle or chopstick to form a cylinder or draping over an overturned bowl or cup to shape the crisp into a bowl.

My recipe analyzer had this to say about the size I made today and the size I plan to make next time (1 inch diameter). I suspect the calories and fat content may be a little less than indicated because the fat tended to cook out and remain on the parchment paper.

PS – I’ve begun making these with sliced cheese too, something like pepper jack cheese (a whole slice or cut into cracker sized bites), just nuke or broil until bubbly and crisp.