Heavenly Cake Baker Submission #7
Sunday was a big cake day.   I wanted  to fix the lemon cake, but I have bundt pan issues, so I made half the recipe as mini-cupcakes.  I made 24, baking them for about 13 minutes.  Several of the cupcakes overflowed making big flat tops, so I probably should have made a few more.  I also adjusted the recipe by omitting the poppy seeds.  After reading that Rose thinks the cake is still fabulous without them, I thought I’d save a trip to the store. 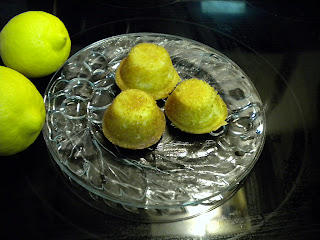 The lemon zest in this sour cream batter was the first layer of flavor in this wonderful delicate cake.  It’s topped off by brushing the cupcakes with lemon syrup; I’d have to describe the combination as bright and fresh.  It’s too bad that my youngest daughter went away to college.  She loves lemony, tart treats.
I also made the apple-cinnamon crumb coffee cake (with a sour cream batter very similar to the lemon cake) for a potluck brunch with friends from church; Marie made it months ago.  It was the first chance I’ve had to use my muscovado sugar, and I think that I was able to pick up on the richer flavor. 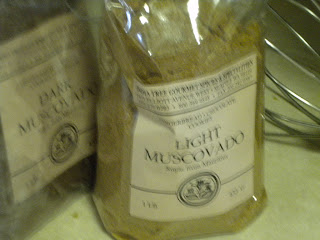 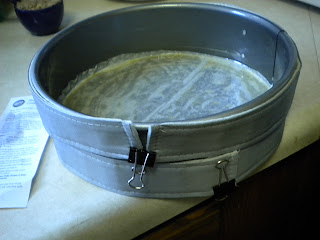 The cake was baked in a parchment lined springform pan.  I just happened to pick up a package of cake strips the last time I was at Michael’s.  I’ve never used them before, but I think they’re going to get a lot of use in the future.  If you happen to buy cake strips, save the straight pins (without plastic heads) that are securing the strips in the package.  I’d  already tossed them in the trash before I read the instructions, and trying to find them was too much like the proverbial needle in the haystack.  I had to resort to using office supplies for now. 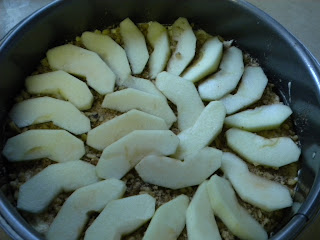 The layer of apples and sugar/walnut filling goes in the middle of the batter.
e 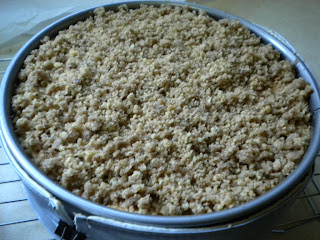 The final layer of crumb topping goes on half way through the baking time. Oh, and after Toni’s comment last week, I checked the date on my baking powder – expired!  Apparently there is a little leeway, but I’m properly embarrassed and adding a fresh can to my list. 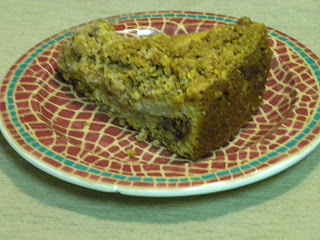 My brunch companions and I discussed possible tasting panel quotes.  I think the one we all agreed upon  was:
There wasn’t a crumb left on the plate!
My husband has been on a quest for the last several months; he’s in search of the perfect apple pie.  He’s away and wasn’t able to join us for brunch, but there’s a piece of this cake in the freezer waiting for him.  Can a coffee cake with just one layer of apples break into the apple pie category?  I think a pastry this moist and flavorful just might! ; )Unlike my other blog posts, as part of the Heavenly Cake Bakers, I don’t post recipes from this book on the internet.  One of the reasons for this baking group is to encourage readers to purchase the cookbook.  That strategy worked on me!  After follow the group’s baking adventures for a couple of months, I ordered a copy from Amazon.  You can too.
Thanks for sharing!