This had to have been the match of the season!  Both teams played all out and so did the fans.

I shot this video on our tram just before we got to the stadium.  We’ve seen singing on the trams after the games, but this was the first time I’ve seen it before the match.  You’ll notice that some lyrics seem to require the singers to jump up and down. 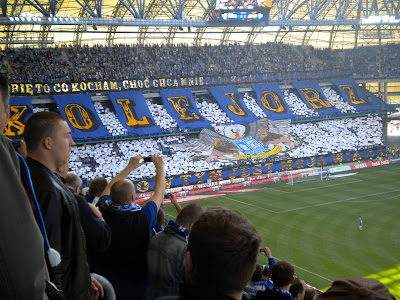 The stadium was filled with banners, and they changed throughout the game.

The only time anyone sat down in the stands was during half-time. 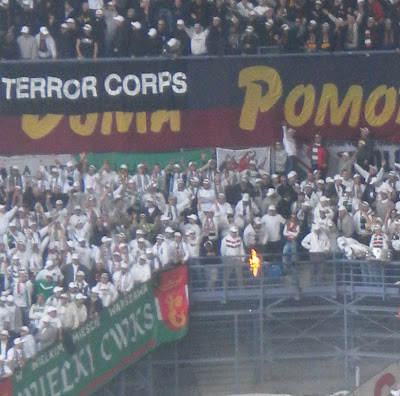 The Legia fans were burning Lech Poznań scarves in their corner of the stadium, tossing fireworks on the pitch and setting off smoke bombs.  And, yes, everyone is patted down and bags searched when  entering the stadium.

Their efforts were in vain.  Lech Poznań won, 1:0, and after their victory, the team sang (complete with jumping) for the fans, and walked to every side of the stands, applauding and thanking the fans.