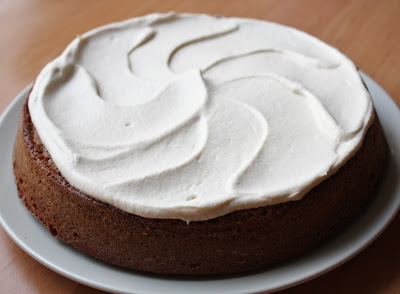 This cake gets its name from the homemade caramel sauce included in the ingredient list.  The only brown sugar I had on hand was dark Muscovado, so this very basic cake was sweetened with a dark, rich caramel sauce.   The caramel added to the cake, not only flavor, but also color and a crisp crust.  When I say that it began as a basic cake, I don’t mean to imply there was anything plain about the finished product.

My cake pan is not 2 inches tall, so I portioned the batter to also make two cupcakes.  This prevented the cake from overflowing the pan, and gave Ed and me cupcakes to sample for dessert yesterday while sending the pretty whole cake to the base this morning.  I’m guessing that it arrived around 7:30, and I had a text message at 8:38 saying that the cake was gone – to think that the first time Ed took a cake to work, he thought it would take days to eat it all.

I didn’t have instant coffee to flavor the whipped cream, so I used espresso to dissolve the gelatin (used in stabilizing the cream) rather than water.  The result was noticeable yet subtle – very pleasing. 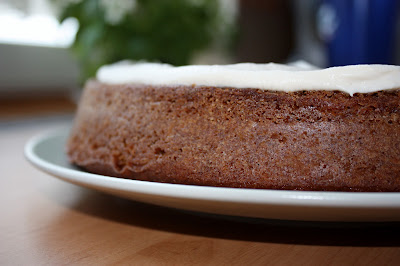