One never knows where inspiration will appear. I had a hair appointment recently that took longer than expected, and Ed passed the time watching Eat the World with Emeril Lagasse. The first season premiered on Amazon on September 2nd, just a few days ago. He enjoyed it so much that he happily watched it again with me. It was in the Spain episode that Emeril’s host served him huevo hilado, or egg yarn, nestled on thin slices of Spanish ham.

My parents recently gave Ed and me an Iberico ham for our birthdays, so this seemed like something we should try. It was a crazy, fun experiment!

Reading about egg yolk cooked in syrup reveals that this is a very old technique, Byzantine perhaps, one known all over the world. It became popular in the Mediterranean during the Middle Ages.

In Portugal or Brazil, it’s know as fios de ovos, egg threads and the syrup might be made with orange blossom water or rose water. Served on their own or as a garnish for cakes, the threads are very popular.

How are these candied threads of egg yolk on a nice jamon, you might ask? Fantastic! We followed Emeril’s example and rolled a bit of ham around the huevo hilado, kind of like a taco. The flavors go together beautifully. The saltiness of the jamon is classically complemented by the sweetness of the candied egg. 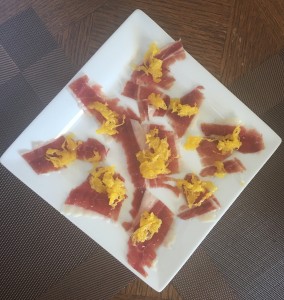 I’m happy to know about this little delicacy. I can see making this again to provide an interesting texture as a garnish to other dishes, or the most unusual amuse bouche or a sweet single bite to end a meal.

I love the very real sense of history and continuity that comes from whipping up something in the kitchen that’s been around for hundreds or thousands of years.