Wikipedia tells me that Hamantaschen is the plural form of the little three cornered hat-like cookies, traditional for Purim. There is lot of speculation about the meaning behind the name. I’ll just say that they’re supposed to represent the defeated enemy of the Jewish people. Haman (from the book of Esther) wore a three cornered hat. My baking friend, Mendy, made a quadruple batch for his family, and then did the same again to have plenty on hand for holiday guests. 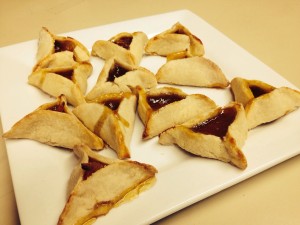 The cookie dough reminded me of the Ischler (minus the almonds). It’s very a very short pastry but light and delicate at the same time. The recipe includes a make your own poppy seed filling, but if Mendy’s going with other fillings, I though I would too.

I used apricot preserves from our summer road trip through France and some citrus marmalade (recipe to be posted later in the week) that I made over the weekend. If you live in Arizona this time of year, you’re bound to know at least three people who have trees covered in beautiful citrus that they’d like to find homes for — much like the “leave zucchini on your neighbors porch” day that comes later in the year.

Since my cookies were filled with jam, I didn’t bother with the jam glaze for the outside of the cookie, but I think it would have been a nice touch for the pie crust like cookie. Next time, I think I’d do a nut filling and an apricot glaze.

Sorry, poppy seed, the most traditional filling just isn’t making the cut. There’s the whole stuck in your teeth issue. If you decide to go this route, look for a place to buy them in bulk, not the tiny jar in the spice aisle, you’ll need almost of cup of the little buggers. Just don’t forget to check a mirror.