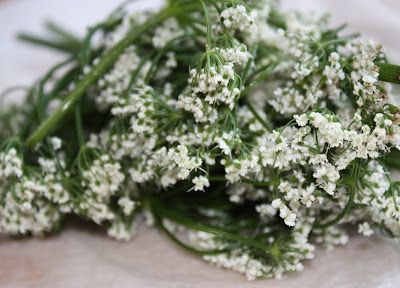 When I lived in England many, many years ago, the elderly lady who lived in the other side of the duplex cottage, Mrs. Meade (sounds like she could be a character in the game of Clue), invited me to help her pick elderflowers.  She was going to make elderflower wine.  It’s been so long that I can’t even remember if I ever sampled some of the finished product.

Elderflowers lead to elderberries.  The elder plant doesn’t grow in my part of the world (Tucson, AZ), so that was the extent of my knowledge – until last week.

I was dining al fresco with other members of the Poznan International Ladies Club, when the woman next to me pointed out that our hostess had a large elder bush in bloom and that’s what you need to make elderflower cordial, something that she had grown up with in Denmark.

That led to some internet research on my part and the decision to do a little foraging on my bike ride today.  There’s a wooded area near our lake, and I snipped just 20 flower stalks from a long row of plants.  When I got home, I gave the flowers a shake to remove bugs, and there were plenty.  I then rinsed them in a bowl of water.  Some recipes I’ve read online specifically said not to wash the flowers, but I’m American, I can’t help it.  I want to refrigerate everything too.  The water drove off several more bugs that I hadn’t been able to see.


My friend, Rob, is a fellow food bloggerand the chef at the Curious Kumquat in Silver City, NM.  He’s into slow food and cooking local in a big way.  (If you’re in the Silver City area add this restaurant to your must do list.  He’s crazy creative in the kitchen.  I hope to take Ed went were home in December.) Rob includes foraged items on his menu, so I had to tell him about my outing.  He mentioned that the flowers are also used in desserts – more internet research. 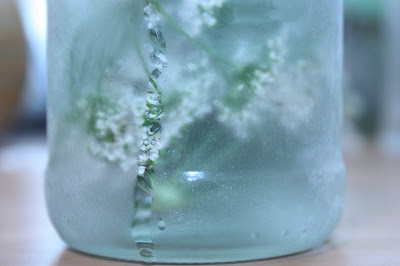 For the Elderflower Liqueur, I put 10 flower stalks in a small jar (8 to 10 ounces) and filled it with vodka.  It will sit in the cupboard for a month, at which point I’ll strain it and add 1/4 cup sugar. 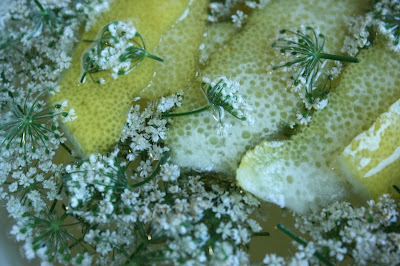 For the Elderflower Syrup, I put 2 cups sugar in a container and added 2 cups of boiling water, stirred until the sugar dissolves.  Add the juice and zest of 1 lemon and 10 flower stalks.  This will sit in the fridge for a few days before straining.

I’ll let you know how they turn out.