Rather than share a Polish recipe today, I’m sharing one I first heard of when we lived in Poland, easy Dauphinoise Potatoes. Living in Poznan exposed us to many things European, and for native English speakers, the easiest to take in are things from Britian. Our Polish cable televsion brought us BBC Europe in our channel lineup. Watching the UK version of Come Dine with Me was the highlight of many an evening at home. 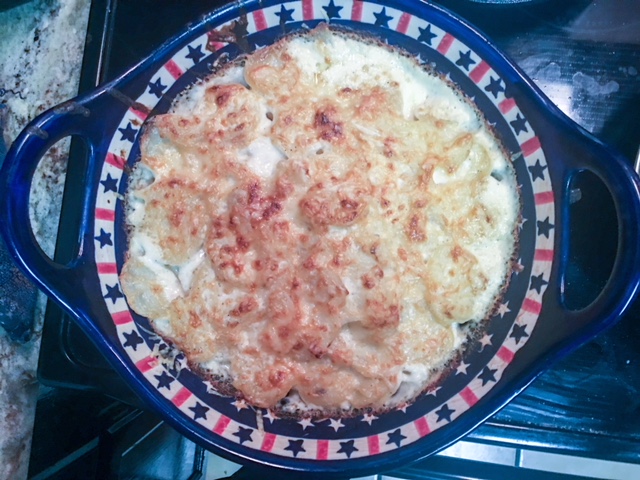 If you’re not familiar with the program, it consists of four folks, who take turns hosting the other three participants in their home for a dinner party. The three guests score their hosts, and after the final meal, the overall winner is presented with one thousand pounds! We see highligths of them cooking in the kitchen, of the dinner conversation, and interviews in between, where they talk about the meal the night before or the menu they’ve been given for an upcoming meal. The highlight for us is Dave Lamb, an English actor and comedian, who provides voice over commentary, and says all the snarky things that cross my mind as I’m watching and then some.

Watching the show, pointed out differences in British food and American food. There were dishes I’d never heard of, even though I lived in England for a while, way back when. Many of these novel dishes were repeated frequently, sometimes within the same episode. Dauphinoise Potatoes was a dish that appeared with great frequency. (We’ve talked about hosting a dinner party and preparing a menu that would only be the most popular items form Come Dine with Me.) At first glance, I thought Dauphinoise Potatoes are just Scalloped Potatoes or maybe Potatoes au Gratin. For me, the key difference is cooking the sliced potatoes in the cream before moving them to the baking dish with Gruyere cheese. That seems to make a big difference, that and the garlic. Yum.

As they bake in the same cream and milk in which you’ve boiled them with a clove of garlic, the potatoes meld into a thick and rich, mildly cheese casserole. We fixed them a couple of weeks ago when our friend, Mark, was visiting for the weekend. We had them the first night for dinner, and the next two mornings for breakfast. They’re very tasty with a fried egg on top.

Now I’m waiting for my next opportunity to work easy Dauphinoise Potatoes into the menu.

A rich and creamy potato dish